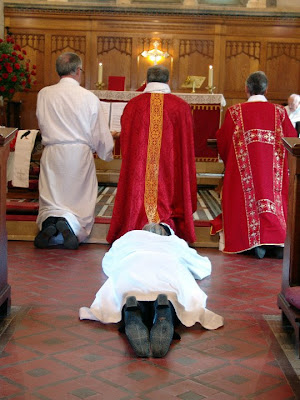 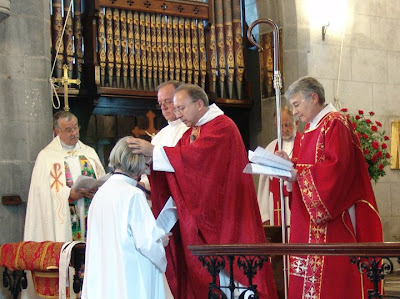 In what was a bit of an "ordination road-show", Archdeacon David Sutch, Area Dean Canon Hugh Broad, my chaplain Deacon Frances Hiller and I flew from Madrid following the ordination of Nigel Thomas, to Tenerife, for what I believe to be the first Anglican ordination in the Canary Islands: Jennifer Elliot de Riverol who was made deacon on Sunday 3 July in All Saints Church, Puerto de la Cruz, Tenerife.

Deacon Jennifer has felt a calling to the sacred ministry for over 20 years. She will serve as Assistant Curate in All Saints, Tenerife, with special responsibility for the Congregation of St Martin de Porres, on the neighbouring island of La Palma, where she has already ministered for a number of years as a reader. Her supervising incumbent is the Chaplain of Tenerife North, the Revd Mike Smith.

The Area Dean was the preacher for the service, and one of Jennifer's lecturers at the Eastern Regional Ministry Course in Cambridge, the Revd Richard Morgan, was one of her presenters.

Many parishioners from La Palma joined in the historic service in All Saints, and with great joy a new sense of partnership and mutual support was affirmed between the "mother church" in Tenerife and the daughter congregation which Jennifer will lead in La Palma. A festive lunch was prepared by All Saints which was enjoyed by all present in the parsonage gardens. 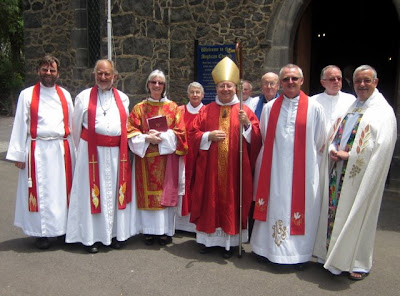 Posted by David Hamid at 06:00
Email ThisBlogThis!Share to TwitterShare to FacebookShare to Pinterest