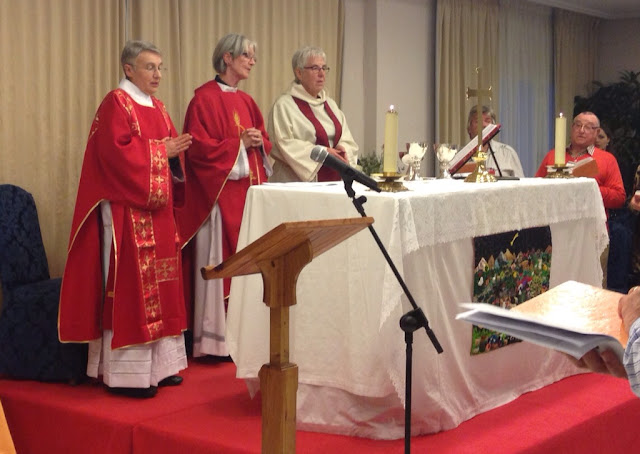 At the recent Synod of the Archdeaconry of Gibraltar in Torrevieja, Spain, an opportunity was given for two of their newest clergy to exercise their ministry on the feast of King Charles the Martyr. The Revd Jennifer Elliot de Riverol (above centre), assistant curate in La Palma who was ordained to the priesthood last June, presided at the eucharist, and the Revd Anne Jenkins (above right), who was licensed as priest-in-charge of Costa Brava last October, preached the sermon. The deacon for the celebration was Frances Hiller.

It was a packed agenda for the Synod. There were plenary sessions on theological, spiritual and missiological matters, as well as separate meetings devoted to the interests and needs of Readers and Readers in Training, and Parish Treasurers.

The Synod also discussed two items of business which are certain to have a wider interest in the diocese and beyond.

The other was a follow up to the failure of the women bishops' measure in the General Synod. Recognising that the there is now an attempt to prepare fresh proposals for consideration at the next sessions of General Synod in July, the clergy and laity of the Archdeaconry of Gibraltar agreed, by an overwhelming majority, to pass the following motion to register the views of the Archdeaconry about the process. This motion will now go to the Diocesan Synod in June:


"The Archdeaconry Synod of Gibraltar endorses the efforts of General Synod to advance the process on the Ordination of Women as Bishops, with our hope for an expeditious and positive outcome."

Posted with Blogsy
Posted by David Hamid at 23:20
Email ThisBlogThis!Share to TwitterShare to FacebookShare to Pinterest