The Pope Announces his Resignation 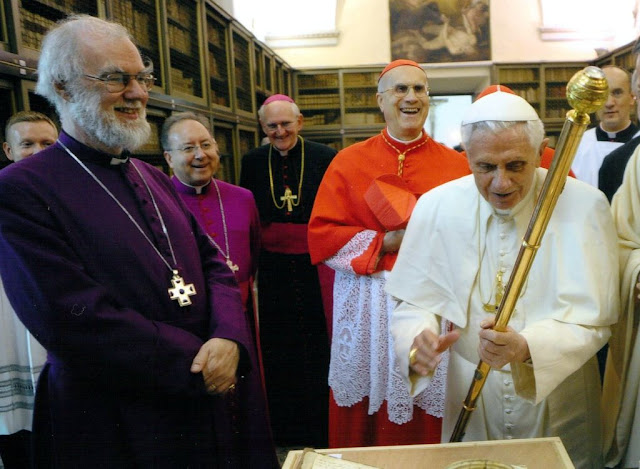 The dramatic news of the intention of Pope Benedict XVI to resign which was announced today has taken the world by surprise. I must admit that when I had some close contact with him last March during an Archiepiscopal visit to Rome, at that time I thought he was looking quite frail  Even though he was animated and in very good humour during the visit (as can be seen above), it did cross my mind whether his age might be making his ministry more difficult.

However, just last Wednesday 6 February I saw the Pope again, this time at a General Audience in the Vatican. I was moved to hear him give a very capable and lively catechesis on God as Creator of Heaven and Earth, drawing on the Book of Genesis and delivered in Italian, Spanish, Portuguese, French, German, with even some words in Polish and Arabic! I concluded that God had given him renewed strength. So, along with the rest of the world I did not expect today's announcement that he will resign on 28 February, as he put it, "recognising my incapacity to adequately fulfil the ministry entrusted to me".

We pray for Pope Benedict XVI who has made a momentous and prayerful decision. A resignation of a Pope has not occurred since 1415. In so many ways it shows the Pope’s mature, pastoral concern for the well-being of the Church that he leads.We pray for a restful and fruitful retirement.

We pray also for the Roman Catholic Church entering this time of transition, and particularly for the College of Cardinals who will assemble in Conclave in March to elect a successor.

The Archbishop of Canterbury, Justin Welby, has issued a statement here.
Posted by David Hamid at 12:54
Email ThisBlogThis!Share to TwitterShare to FacebookShare to Pinterest