The majority of the members of the Anglican Parish of Nerja and Almuñécar are either resident retirees from the UK or “swallows”, retirees who spend part of the year in the UK and part in Spain. Nevertheless the Church Council is making efforts to attract younger families a matter of priority. One way is through the programme "Messy Church" which is held once a month. As a result, contact has been made with about 30 younger families, which gives much hope for the future.

This is also the parish which pioneered an outreach project which is now being copied in other Spanish congregations: a charity shop. Apart from the income that the shop generates each year in support of the parish’s ministry, it provides a much needed service to many local people who are finding life increasingly difficult during these economic times.

Like so many of the Church of England parishes in Spain, maintaining good local ecumenical relations in Nerja and Almuñécar is a vital priority, given that we borrow Roman Catholic churches for our services. Fr Geoff Johnston, finds that frequent meetings with his Roman Catholic colleagues helps to keep up his Spanish as well.

On Sunday 3 February, I celebrated the Feast of Candlemass in Nerja, with Confirmations and Receptions into the Church of England. The parish website is here. 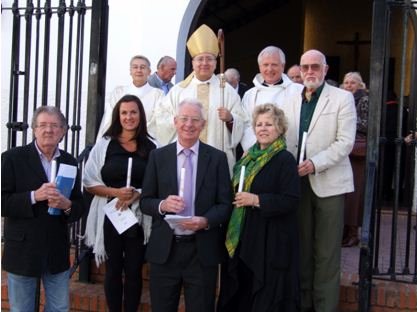 Posted by David Hamid at 22:56
Email ThisBlogThis!Share to TwitterShare to FacebookShare to Pinterest