Florence parishioner: one of a group of Anglicans from around the world in Rio for the (RC) World Youth Days 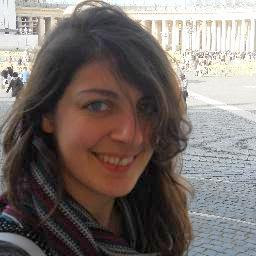 The Diocese in Europe will have a presence at the Roman Catholic World Youth Days in Rio de Janeiro, Brazil, from 23 to 28 July. Our representative is Alice Christofi, a 20 year old member of St Mark's Florence. Alice was born in London and is a student of modern languages. She is a faithful member of the parish and is frequently the MC at the liturgies as well as a participant in the musical life of the Church, according to Fr William Lister, Chaplain of St Mark's, pictured below with Alice and Reader Penny Mittler. 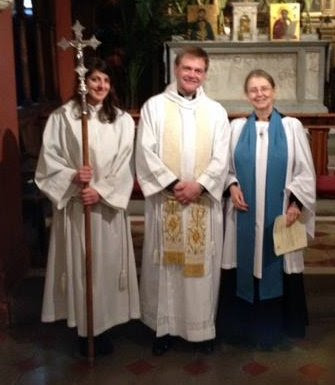 The idea of an Anglican presence in Rio came from Fr Nicholas Wheeler of the Anglican parish in Cidade de Deus. He contacted me earlier this year about his plans to organise an Anglican youth delegation drawn from around the Communion to be part of this major Roman Catholic event, at which the special guest will be Pope Francis himself.

Fr Nicholas is also arranging for our youth delegates to have an exposure to the significant work and ministry of the Anglican Episcopal Church of Brazil, especially in the marginalised areas of Rio, such as Cidade de Deus. Fr Nicholas describes the work of our minority Anglican Church this way: "the provision of generous space where people can gather to engage in the transformation of the community". He is pictured below with some of his parishioners before a mural in the Church. 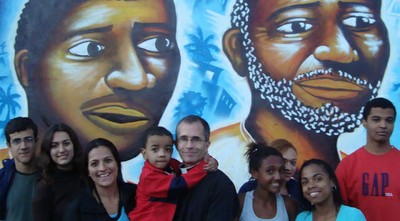 Archdeacon of Italy and Malta, the Venerable Jonathan Boardman says, "I am so pleased to hear about this! Great for Alice, Florence, and the Archdeaconry!" And for the diocese in Europe!

We wish Alice boa viagem! and look forward to her reports of this event.
Posted by David Hamid at 12:57
Email ThisBlogThis!Share to TwitterShare to FacebookShare to Pinterest