French Archdeaconry Synod is not afraid to engage in dialogue on controversial issues! 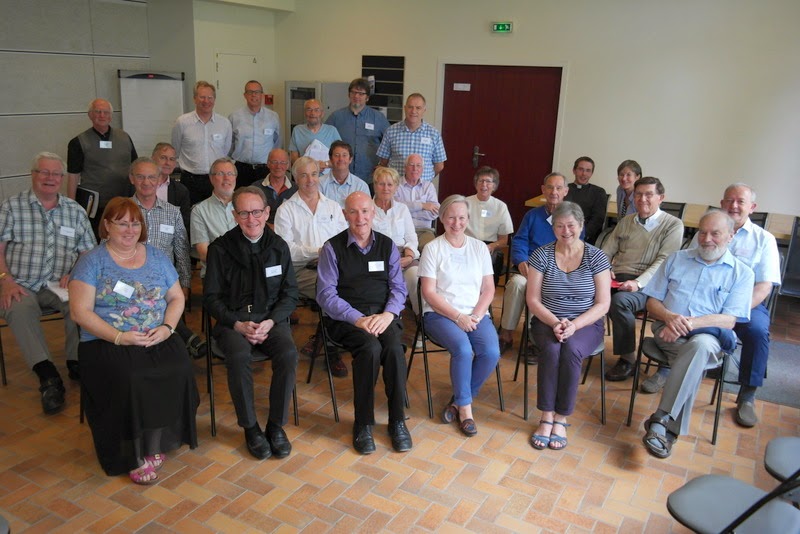 The Archdeaconry of France is quite possibly the largest in the diocese with over 65 regular congregations in France and Monaco served by about 30 priests and an equal number of Licensed Lay Ministers (Readers). From 15 to 18 April the clergy and lay representatives gathered for their annual Synod at St Jacut de la Mer in Brittany, under the presidency of Archdeacon Ian Naylor. The Archdeacon (front row 3rd from left) with some of his clergy can be seen in the above photo.

The synod invited the Revd Dr Charlotte Methuen to give two papers on "The History and Theology of Marriage". Dr Methuen was a priest of this diocese, first in Bonn/Cologne, then as Director of Training. She now teaches at the Faculty of Divinity in Glasgow University. Bible studies were led by the Revd Canon Dr Simon Taylor, the Canon Chancellor of Derby Cathedral and the Ministerial Development Officer of Derby Diocese. The theme of his Bible Studies was "Sex and Marriage". I commend the members of the French Archdeaconry for engaging with two scholars on one of the most discussed (and often divisive) issues in today's Church.

Not surprisingly, with a large number of congregations and clergy, the French Archdeaconry faces a steady turnover. So an important session at the synod was given over to the procedures and norms for recruitment and appointment of clergy. It was led by the Archdeacon and my Chaplain, Deacon Frances Hiller, who work closely with me and the Appointments Secretary, Catherine Jackson, and the Area Deans and Parish Representatives at the time of a vacancy in a congregation of the Archdeaconry.
Photos courtesy of the Very Revd Walter Raymond, St Paul's Monaco

Posted by David Hamid at 18:27
Email ThisBlogThis!Share to TwitterShare to FacebookShare to Pinterest