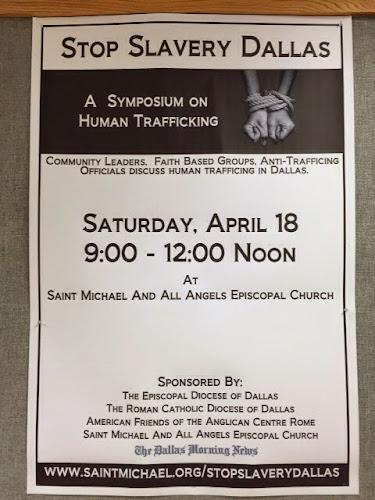 Local and international dimensions of the Church's ecumenical justice ministry came together at an event at St Michael and All Angels Church in Dallas on Saturday 18 April. St Michael's had been hosting meetings of the Governors of the Anglican Centre in Rome (ACR) and the American Friends of the ACR. Archbishop Sir David Moxon, the Director of the ACR and the Archbishop of Canterbury's Representative to the Holy See, took a key role in the event which was a symposium on human trafficking. Archbishop David is well known to this diocese, of course, not only in Rome and Italy, but from his presentation to our Diocesan Synod last year.

Archbishop Justin Welby and Pope Francis are committed to working together with other ecumenical and inter-faith partners to fight human trafficking and modern slavery. Archbishop Moxon in his role as Director of the ACR devotes a significant amount of his time to promoting this ecumenical initiative. It is estimated that around 38 million people around the world are victims of modern slavery which takes many forms from forced labour and prostitution to organ trafficking.

The Roman Catholic Diocese of Dallas and the Episcopal Diocese of Dallas, together with St Michael's parish organised the symposium. Over 300 people came to participate and to hear Archbishop Moxon. With him on the panel were local leaders who are working on the issue of human trafficking/modern slavery, a human rights worker from local family services, the anti-trafficking coordinator from the police department, an immigration lawyer and a former US ambassador who has established an organisation to restore and empower formerly trafficked girls and women. It was an impressive coming together of perspectives from the global level and the commitment to activity at the local level.

I was able to have conversations with some young Episcopalian students who are organising within their own university on this issue and have convinced the authorities only to buy and sell clothing on campus, including the extensive range of official sportswear one finds in a US university, which is "slavery free". I encouraged them to link to the global movement to combat modern slavery which is supported by the ACR, to see if Anglican young adults in other places could take similar initiatives. 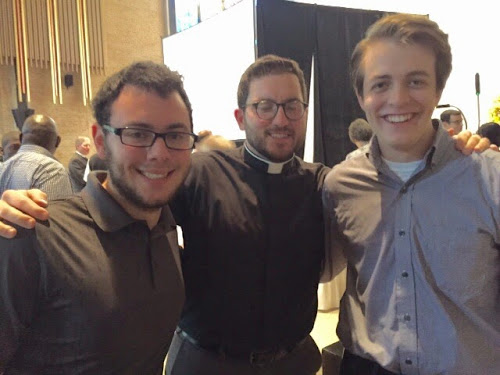 Posted with Blogsy
Posted by David Hamid at 17:25
Email ThisBlogThis!Share to TwitterShare to FacebookShare to Pinterest