Ecumenical coordination in Athens is growing for the sake of refugees 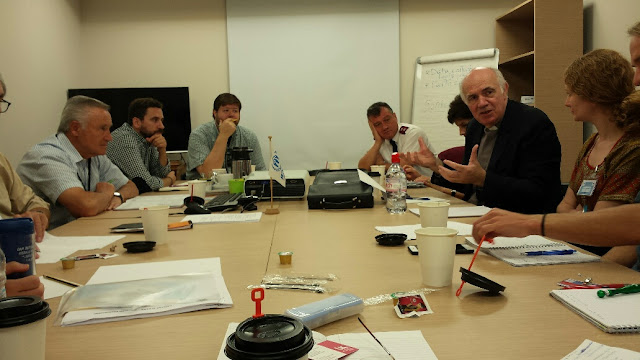 Canon Malcolm Bradshaw, of St Paul's Athens, reports on the emerging ecumenical cooperation in Greece with regard to assistance for refugees. This emerging coordination is a fruit of much Anglican initiative.

On the morning of Thursday 15 October six Christian agencies and Churches came together in the offices of the UN High Commission for Refugees (UNCHR), Athens, to learn what each one was doing in the face of the refugee crisis. They were able to share information on the resources that each may have and to explore the possibility of working more cohesively and effectively.

Around the table were Apostoli (the centre for the welfare work of the Orthodox Archdiocese of Athens), International Orthodox Christian Charities, the Jesuit Refugee Service, Caritas, the Salvation Army, the Greek Evangelical Church, the Anglican Chaplaincy in Athens (who joined by representatives of Anglican Alliance and Us) and a representative from UNCHR. All welcomed greatly the opportunity to be informed of what each Church was doing and something of the resources each could bring to the table.

There was an openness to the idea that an individual Church take lead responsibility for a particular programme or programmes which the other Churches could then tap into, so as to avoid duplication. A commitment emerged to keep one another informed of the constantly changing situation that is the nature of the refugee crisis and to alert one another as to where gaps in humanitarian aid appear.

All acknowledged that the crisis is likely to become greater in the future and will be on-going, so there was an emphasis on long term planning. Discussion arose about establishing a person to assist in collating and circulating information, undertaking research and to be a focus of cohesion for the Churches.

The meeting ended with exploring the provision of a safe passage for the refugees from Greece through to northern Europe as an alternative to the provision made by the traffickers. At present the traffickers appear to be in total and unchecked control of the flow of refugees, extorting vast amounts of money from the vulnerable.

The value of this gathering and the urgency of beginning to work together were so strongly felt that a further meeting was arranged for the end of this month. Such a widespread representation of Churches working together is a rare feature in Greece. ‘A good and fruitful meeting’ was the verdict of Fr Maurice Joyeux  of the Jesuits.

Posted by David Hamid at 08:09
Email ThisBlogThis!Share to TwitterShare to FacebookShare to Pinterest