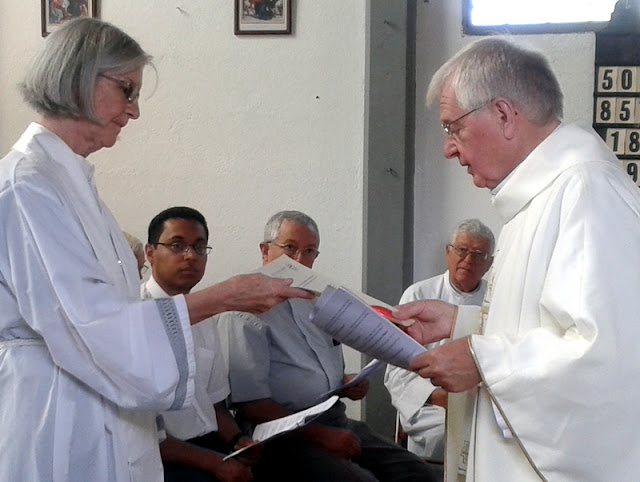 On September 24th the Venerable Geoff Johnston, Interim Archdeacon of Gibraltar installed and licensed the Revd Jennifer Elliott de Riverol as the first Priest-in-Charge of St Martín of Porres, La Palma. This is a new chapter in the life of this congregation,which, until recently, was a part of the Tenerife North chaplaincy based on the neighbouring island. Jennifer has been instrumental in the development of this work, including nurturing warm and collaborative relations with the local Roman Catholic clergy. 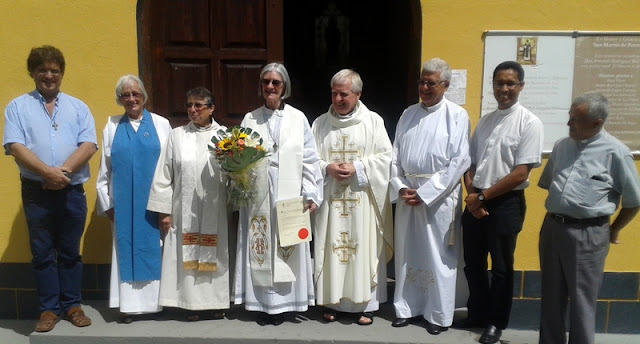 The licensing was a very joyous occasion and the newly formed congregation was joined by members of the two parishes in Tenerife, as well as friends from the UK and, significantly, four Roman Catholic colleague priests from La Palma, The Revd Doreen Cage came from the Málaga chaplaincy, so the Spanish mainland was also represented at this historic event. 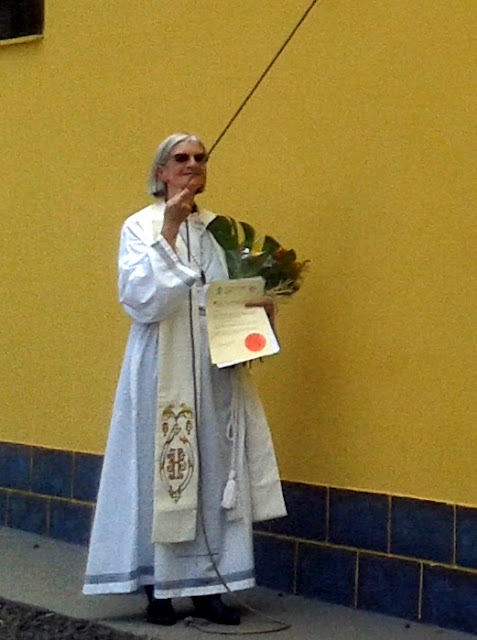 The liturgy included the tradition of the new priest ringing the bell of the parish church. Don Domingo Guerra, one of the RC priests, handed Jennifer a broom, a symbol of San Martín de Porres who considered all work to be sacred, no matter how menial. I reckon it might also be the only Anglican congregation in the world dedicated to San Martín de Porres. 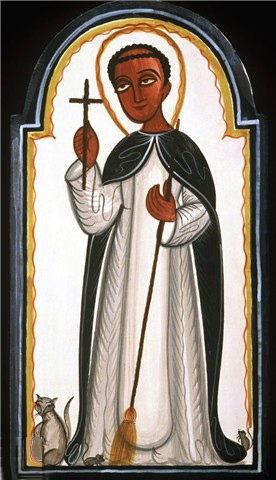 This saint was born in Lima, Peru, in 1579, of mixed Spanish and African / Native American heritage, his father being a Spanish nobleman and his mother a freed slave from Panama. He joined the Dominican order, at first only as a volunteer who had to perform the most menial of tasks, as at that time descendants of Africans and Indians were barred from becoming full members of religious orders. His feast day is 3 November. He is patron of barbers, and, not surprisingly, of those of mixed racial heritage!

The future looks very bright for this new parish. We look forward to the next chapter in the development of the work in La Palma, especially in collaboration with our ecumenical partners on the island. Jennifer's ministry presently includes working as a chaplain in the hospital in La Palma alongside another of her RC priest colleagues, who came to her licensing, Don Anselmo. She celebrates a monthly eucharist at the hospital. In addition to services at San Martín de Porres, there is also a monthly eucharist at the (wonderfully named) 17th century Church of Nuestra Señora de Bonanza in El Paso.

The Archdeaconry of Gibraltar is a leading area for Church growth in the diocese. Besides St Martín de Porres on La Palma, other new congregations having been formed in recent years in such places as Costa Brava, Fuerteventura and Rabat.

Posted by David Hamid at 13:54
Email ThisBlogThis!Share to TwitterShare to FacebookShare to Pinterest