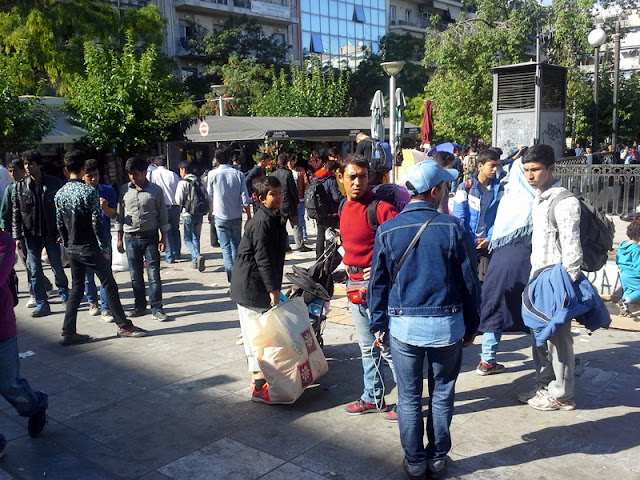 The Revd Rachel Carnegie from Anglican Alliance visited Athens last Thursday. (Anglican Alliance is an organisation of the Anglican Communion that brings together Churches and Agencies of the Communion for coordinated relief, development and advocacy). Fr Malcolm Bradshaw took her to Victoria Square where they were joined by Captain Polis Pandelidis of the Salvation Army. Each day around 3,000 refugees gather in this central Athens square. Approximately thirty five percent are Syrians, others are from Iraq (Kurds), Afghanistan and Pakistan. Here they buy bus and train tickets from traffickers to continue their journey north to the border between Greece and FYRO Macedonia. Although the municipality is providing accommodation in a former Olympic Games sport centre on the edge of the city there is reluctance by the refugees to take up this opportunity because of the scramble for tickets for onward travel. They have no desire to stay in Greece. Rather, they anticipate spending only twenty four hours on the square. No toilet or washing facilities exist. Gastroenteritis is rampant especially among the children.

The young man in red in the above photo is a Kurd from Iraq. So far, the worst part of the journey, he declared, was the four mile sea crossing from Turkey to Lesvos. Here is his story as told recently to Canon Malcolm Bradshaw, our Senior Chaplain in Athens:


"We were held up in woodland by the shore because of rain and poor weather. When the weather changed the traffickers drove us like animals to the waiting dinghies. You can see the scratches and bruises on the arms and legs of the children. Forty to fifty adults and children were crowded onto a dingy built for ten people at the most. Fifty dinghies left that afternoon. The life jackets we bought from the traffickers proved to be fakes. Would do nothing in an emergency. The children were given arm bands and adult life jackets were sellotaped to their bodies.  I took responsibility for the outboard motor. We had barely sufficient petrol to complete the journey. Lesvos was so near yet seemed to take an age to arrive at. I had no knowledge of how to handle the dingy. That part of the journey was horrendous.’ 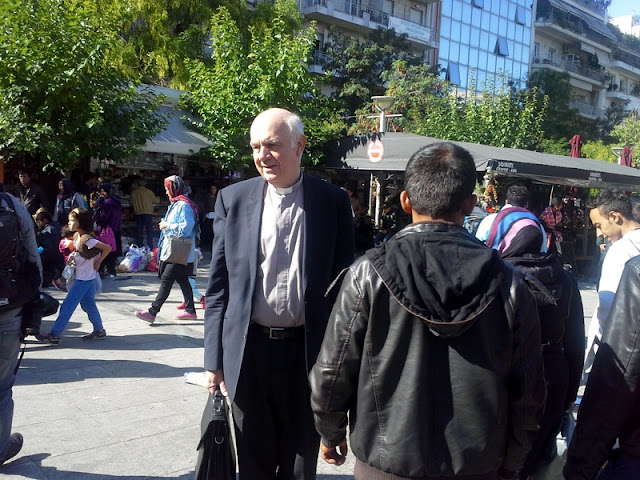 Fr Malcolm and Captain Pandelidis discussed with Rachel what they have observed: a rush of assistance to meet the needs of the refugees but no co-ordination. Constant duplication occurs. The three discussed the long term needs. This issue of the refugees is here to stay. It will not end in a matter of weeks or months. They discussed the importance of holding onto and collecting resources for use when donations begin to flag. The Syrians perhaps are in a better position because they may attain amnesty in Europe and some financial resources. The most vulnerable may be other refugees, who may be considered to be economic migrants and who have little personal finance. These may be the ones who are unable to move on. The three also noted that the bitter Balkan winter which is now approaching. There is a need to prepare and distribute survival kits.

Fr Malcolm, Rachel and Captain Pandelidis heard how a coffee shop owner on the square made his toilets available on a regular basis, early in the morning for the refugees; an act of generosity and kindness. He was stopped by the police. Apparently he was infringing upon a law which declared it was illegal to give assistance to irregular migrants! 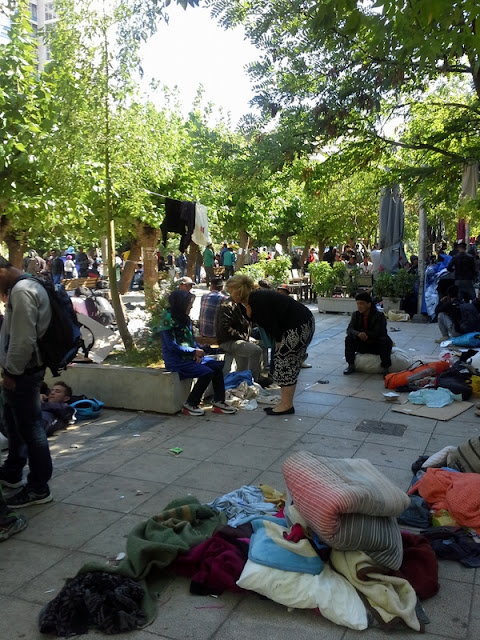 Rachel Carnegie's visit included time with the local Anglican Church, the Salvation Army and Apostoli, the welfare offices of the Greek Orthodox Church. the purpose of her visit was to explore how best Anglican Alliance could use its networking resources to support the Anglican Church in Athens and the Diocese of Europe in making a response to the needs of the refugees.

One possibility is a joint project between Apostoli and the Anglican Church to rent hotel rooms to provide a three night stay and medical support for families with sick children. A private donor has made money available to start such a programme. It will need further funding as will the other programmes discussed.

Us (formerly USPG) is coordinating the receipt of donations on behalf of the Diocese in Europe and the Anglican parishes in Europe on the front line of this crisis. If you are interested in contributing towards these needs, please visit the Us website here.

Posted by David Hamid at 12:51
Email ThisBlogThis!Share to TwitterShare to FacebookShare to Pinterest