Canon Dr Simon Stephens OBE is a well known and much loved priest of our diocese. He first served as priest-in-charge of Sta Margarita, Menorca, then for many years as Chaplain of St Andrew's Moscow. He retired from that post in 2014. Fr Simon was honoured last Thursday in a ceremony at Lambeth Palace when he was given a Lambeth Cross for service to the Church's ecumenical life. I know from my own visits to Moscow how significant his ecumenical work there has been, particularly with the Russian Orthodox Church.

Here is the full citation for Fr Simon's award:

Awarded to Canon Simon Edward Stephens for his significant contribution to ecumenism, especially with the Eastern Orthodox Churches.

In June 2014 Canon Simon Stephens retired as Chaplain to St. Andrew’s Church and Anglican Centre, Moscow after fourteen years of outstanding service. He extended the work of the chaplaincy both geographically and pastorally, with visits to Mongolia for Christmas Services, to Kiev and monthly visits to St. Petersburg to take Communion Services, and elsewhere in his role as Area Dean, even travelling to Murmansk Prison to visit British detainees.

At the same time, Canon Stephens built up the congregation at St. Andrew’s where he nurtured the vocations to the Anglican ministry of two Russian Postgraduates. He fostered closer relations with the Russian Orthodox Church and with Patriarch Alexei and his successor Patriarch Kyrill.

He also established strong links with the British Embassy, together with many Commonwealth Embassies. His ministry also extended to several outreach programmes for local Russians, such as a branch of Alcoholics Anonymous, a reference library and concerts and opportunities for other gatherings.

After St. Andrew’s received a grant in 2003 from the Fellowship of St. Alban and St Sergius in Oxford to create a library for the Biblical Theological Institute of St. Andrew (called by its Russian acronym BBI), St. Andrew’s, BBI, and the Fellowship began a dialogue to create in 2006 the very first Anglican - Orthodox Education Centre, bringing together noted theologians and scholars from Russia and abroad to discuss current theological issues and foster understanding between the Orthodox and the Anglican Communions.

Such a ministry over fourteen years demanded exceptional political and ecclesiastical gifts and hard work in order to establish, sustain and build up an Anglican presence and to reach beyond denominational boundaries in such a city and, not least, at such a time.

We send our warmest congratulations to Fr Simon on receiving this well-deserved award.

Fr Simon's ministry in this diocese continues: he is always up to new challenges! I have just appointed him as priest-in-charge of St Andrew's Tangier where he began his new ministry in Holy Week. He is always a welcome visitor to our Tufton Street offices, and usually brings news from all over the world (his networks are impressive!). But most importantly he never fails to deliver much appreciated words of joy and encouragement to the Diocesan Staff as can be seen in the photo below, when he was finalising details of his appointment with our Appointments Secretary, Catherine Jackson. 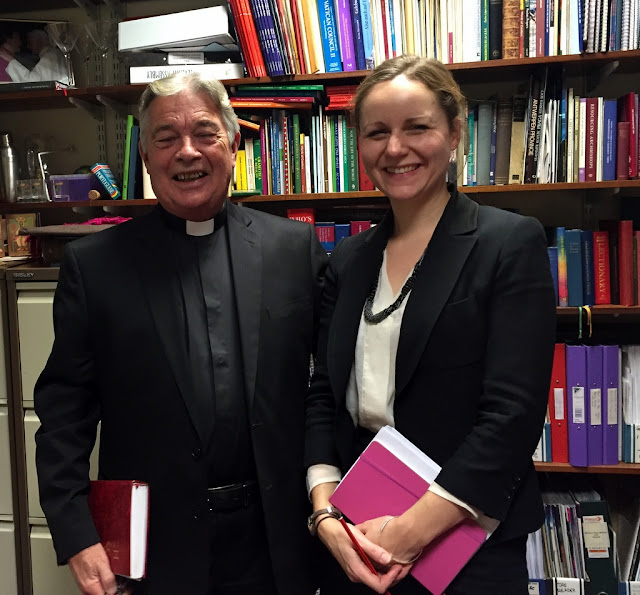 Posted by David Hamid at 08:48
Email ThisBlogThis!Share to TwitterShare to FacebookShare to Pinterest