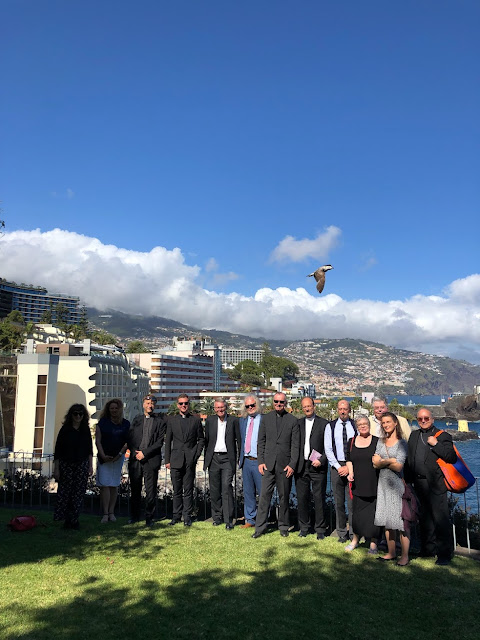 In 1889 an English aristocrat, Viscount Halifax (Charles Lindley Wood) and a French Roman Catholic priest, Abbé Fernand Portal, met on the beautiful island of Madeira. A friendship began that led to the Malines Conversations of the 1920s which were the precursor of the modern bilateral dialogue between the Roman Catholic Church and the Anglican Communion, which now has two official commissions, ARCIC and IARCCUM. 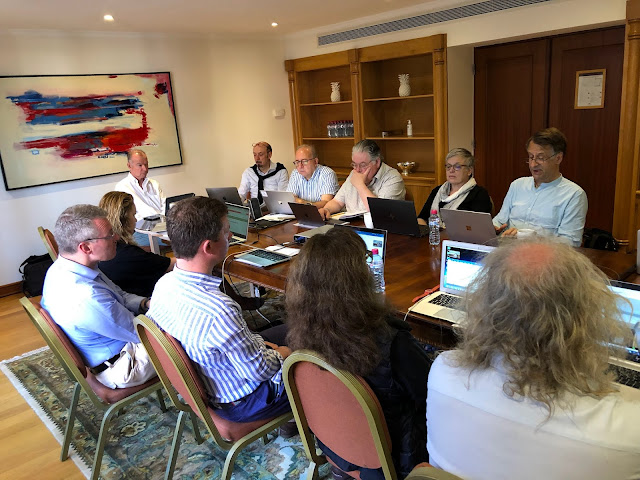 The Malines Conversations continue in a modern form today as a theological working group, supporting the official dialogues through exploring ways to address some vital points which may still hinder our journey towards the unity to which we are committed as Anglicans and Catholics. Last December we published Sorores in Spe an evaluation of Apostolicae Curae, Pope Leo XIII's negative judgement on Anglican Orders dating from 1896.

A recent session of the Malines Conversations were held in Madeira, returning to the place where one could say that the journey towards the restoration of full communion between Anglicans and Roman Catholics began. It was in many ways a pilgrimage to the roots of our dialogue.

The Anglican Chaplain of Holy Trinity Funchal, the Revd Michael Jarman, and the Bishop of Funchal, Dom Nuno Brás da Silva Martins, both played their part in hosting the dialogue group. On Sunday 15 May, the Revd Fr Thomas Pott delivered the sermon at the Anglican Eucharist in Funchal, and Dom Nuno later in the week presided at an ecumenical service at which I preached, and hosted the group for a reception and dinner. Ecumenical relations between Anglicans and Roman Catholics in Madeira are very good indeed. It was wonderful that Fr Michael and his parishioners at Holy Trinity could host the group at their Sunday mass; it is quite likely that Viscount Halifax worshipped at Holy Trinity in the late 19th century.

The full communiqué from the meeting is below:

The postponed eighth international meeting of the Malines Conversations Group took place between Sunday 15th May and Thursday 19th May 2022. Initially proposed to take place in 2020, prior to the centenary celebrations of the Malines Conversations in 2021, the Group was delighted to meet in Madeira, commemorating the meeting of Viscount Halifax and Abbé Portal on the island in 1889/90. This encounter, and the subsequent friendship that developed, was foundational for the initial Malines Conversations and the subsequent international theological dialogue between the Catholic Church and the Anglican Communion. Under the patronage of The Right Reverend and Right Honourable The Lord Williams of Oystermouth (former Archbishop of Canterbury) and His Eminence Cardinal Josef de Kezel (Archbishop of Mechelen-Brussels), the Malines Conversations Group comprises Anglican and Roman Catholic theologians from seven different countries and meets with the encouragement and support of the Pontifical Council for the Promotion of Christian Unity and Lambeth Palace. It includes members of both ARCIC and IARCCUM.

The Group was welcomed by the Bishop of Funchal, The Most Revd Nuno Bras da Silva Martins, who co-presided at a service of Ecumenical Vespers alongside The Right Reverend David Hamid, Suffragan Bishop of the Diocese in Europe. The Anglican Parish of Holy Trinity, Funchal, welcomed the group for a Sunday Eucharist, and was warmly hosted by Fr Michael Jarman and his parishioners.

In December 2021, the Group was delighted to publish Sorores in Spe, arguing for a reassessment of the negative judgement on Anglican Orders made by Pope Leo XIII in 1896. There have subsequently been two public seminars on this text and its reception, at the Angelicum and at the Centro Pro Unione in Rome. During the course of their Madeira meeting, the Group deepened its own thinking on issues surrounding apostolicity, sacramentality, gender and ministry. During seminars and conversations, the Group was once again guided and challenged in its thinking by several companions and guests including The Revd Professor Gordon Lathrop, Professor Barbara Hallensleben, Mme Olga Lossky, The Revd Professor Angela Berlis and Professor Thomas O’Loughlin.

The meeting took place within the context of daily prayer. The group’s next meeting is scheduled for May 2023.

The text of Sorores in Spe can be accessed in English, Italian, German, French and Spanish at www.malinesconversations.org.

The Most Revd Ian Ernest, Archbishop of Canterbury’s Representative to the Holy See, and Director of the Anglican Centre in Rome, observer, absent

The Right Revd Dr David Hamid, Suffragan Bishop of the Church of England Diocese in Europe; Co-chair of IARCCUM

The Most Revd Sir David Moxon, Former Representative of the Archbishop of Canterbury to the Holy See and the director of the Anglican Centre in Rome; Former Co-Chair of the Anglican- Roman Catholic International Commission (ARCIC)

The Very Revd Canon David Richardson, Former representative of the Archbishop of Canterbury to the Holy See and director of the Anglican Centre in Rome

The Revd Anthony Currer, Secretary to the Anglican and Methodist dialogues at the Pontifical Council for Promoting Christian Unity, Rome; co-Secretary of ARCIC; observer

The Revd Professor Thomas Pott OSB, Chair of the Steering Group, Monastery of Chevetogne (Belgium); Professor of Oriental Liturgy and Sacramentology at the Pontifical Atheneum Sant’Anselmo and at the Pontifical Oriental Institute (Rome); Consultor of the Sacred Congregation for the Eastern Churches and of the Pontifical Council for Promoting Christian Unity

The Revd Cyrille Vael OSB, Monastery of Chevetogne (Belgium); Advisor of NNE (New Narrative for Europe) of the Department for Promotion and Protection of the Regional Cultural Heritage of Europe (European Commission)

The Most Reverend Donald Bolen, Archbishop of Regina, Canada

The Right Honourable The Earl of Halifax

Posted by David Hamid at 21:56
Email ThisBlogThis!Share to TwitterShare to FacebookShare to Pinterest