60th Anniversary of the Declaration of Robert Schuman in Metz

On Sunday 9 May, at the Cathedral of St Stephen in Metz (below) there was a day of celebration of the 60th anniversary of the Schuman declaration. (Robert Schuman urged the formation of a values-based political life to help secure Europe's long-term security and prosperity).

The day began with the service of Morning Prayer according to the rite of the Church of England led by our Archdeacon of France, the Venerable Ken Letts. The music for the liturgy was provided by a choir from our parish in Luxembourg. Fr Ken provided note on the liturgy sheet for our ecumenical partners about the central place of the Daily Office in the Anglican tradition.

After Mattins the Archdeacon then gave a lecture on "The Unity of Christians: a testimony given to Europe" and was present at the Solemn Mass at which His Eminence Cardinal Andre Vingt-Trois (Archbishop of Paris, and President of the Conference of Bishops of France) presided.

Other contributions during the day were given by Monsignor Aldo Giordano the Permanent Observer of the Holy See to the Council of Europe. Our presence at this high profile national ecumenical event is a further sign of the respected and valued place our Church of England has within France.

The Venerable Ken Letts is also the Co-Chairman of the Anglican-Roman Catholic Commission of France, and our diocese's ecumenical representative to the Roman Catholic Bishops' Conference. 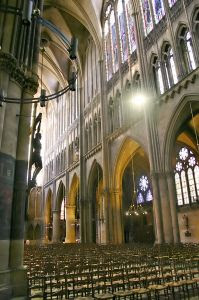 Posted by David Hamid at 10:12
Email ThisBlogThis!Share to TwitterShare to FacebookShare to Pinterest