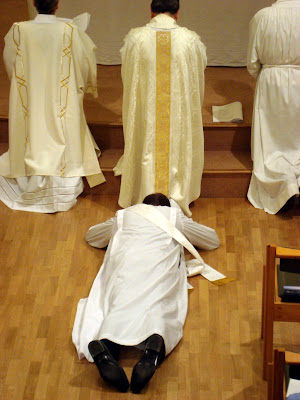 The most recent statistics for ministry in the Church of England are those for the end of 2008. They point to a healthy situation with regards to vocations and ministry in our Church.

For instance, there were about 12,000 licensed clergy and almost 8,000 readers and Church Army officers. In addition there were almost 1,600 chaplains to prisons, hospitals, the armed forces and in education, and around 7,120 retired clergy and readers with permission to officiate.

In 2008 the Church of England recommended 490 persons for ordination training. 574 (274 women and 300 men) were ordained in 2008, the highest number since the year 2000. (In the entire Roman Catholic Church in Belgium, there were 6 ordinations in the same year).

The generally healthy state extends to our own Diocese in Europe where we have 152 licensed priests and deacons and 98 active readers who serve our 270 congregations. 28 of the clergy are women. We are supporting 39 men and women in various stages of vocational discernment or training for ordained ministry and 37 men and women are in academic training to be readers (lay ministers).
Posted by David Hamid at 10:19
Email ThisBlogThis!Share to TwitterShare to FacebookShare to Pinterest