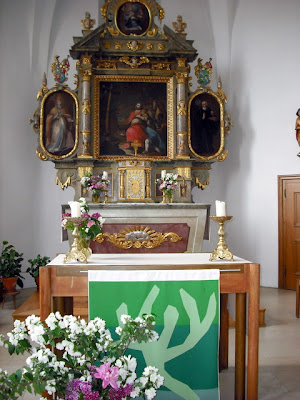 Each year the Anglican and Old Catholic Bishops in Europe meet for consultation, prayer and fellowship. From 17 to 18 June we gathered at Propstei Wislikofen, a historic former monastery north of Zurich. A photo of the beautiful chapel is above.

As well as sharing information about news and developments in each jurisdiction, there was much discussion about the implications of the Archbishop of Canterbury's Pentecost Letter and the response by Presiding Bishop Katharine Jefferts Schori of the Episcopal Church, both dealing with the present divisions within the Anglican Communion. The decision by the Secretary General of the Anglican Communion, subsequent to the Archbishop of Canterbury's letter, to ask the Revd Carola Von Wrangel from the Episcopal Church to step down from membership on the Anglican-Old Catholic Coordinating Council was received with sadness by the bishops. We noted that the Coordinating Council is not strictly speaking an ecumenical dialogue, but an instrument of Churches already in communion, so we will be be following up this matter with the Anglican Communion Office.

We also spent some time discussing a paper by Bishop Pierre Whalon of the Convocation of Episcopal  Churches in Europe entitled "Should the Episcopal Church Create a Missionary Diocese in Europe?".

Some present examples of current Church of England  / Old Catholic Cooperation in Europe include the Airport chaplaincy in Schiphol, Amsterdam, Mission to Seafarer's work in Vlissingen, and the joint parish of St Clement's in Prague.

One of our own clergy, Fr Dan Morrow, Assistant Chaplain in St Andrew's Zurich, was the secretary. Well done Dan. Having to spend a couple of days with 13 bishops could not have been easy!
Posted by David Hamid at 10:14
Email ThisBlogThis!Share to TwitterShare to FacebookShare to Pinterest