Anglicans in Germany look at Selection and Training for Ministry 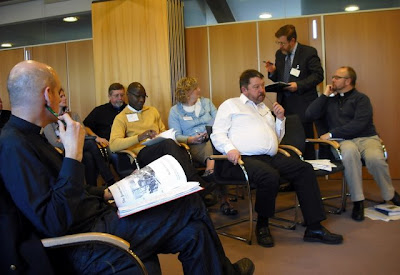 The meeting spent some time looking at the processes for selection and training for ministry, lay and ordained, in both the Church of England diocese and the Convocation.The Diocesan Director of Ordinands, the Revd William Gulliford spoke for the Diocese in Europe. The Rt Revd Pierre Whalon, Bishop-in-charge of the Convocation, and the Revd Jennifer Adams-Massman spoke for the Convocation. The comparative and contrasting features of the process in both jurisdictions was interesting and the members of CAECG learned much from these presentations.
﻿
﻿The representatives of several parishes noted an increase in interest among ecumenical partners, particularly Roman Catholics, in learning about Anglicanism, since the publication of Anglicanorum Coetibus (the provision by the Roman Catholic Church to receive groups from Anglican Churches into "ordinariates").

During the meeting I commissioned the Revd Canon Christopher Jage-Bowler, the chaplain of St George's, Berlin, as Area Dean of Germany for a further 3 year term. In a separate meeting of the Church of England deanery of Germany alone, I gave a presentation on the consecration of women bishops, and the process underway in the Church of England and in our diocese to consider the proposals.

On the grounds of the retreat centre where we met is a church (below) where the Roman Catholic men of Freiburg have, since 1955, met day and night throughout the year for prayer before the Blessed Sacrament. This vigil has its origins in the needs of the postwar period. The men continue to pray for peace in the world, the unity of Christians, and the unity of all of humanity. 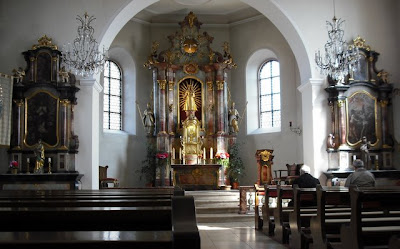 Posted by David Hamid at 15:05
Email ThisBlogThis!Share to TwitterShare to FacebookShare to Pinterest