Archdeacons of the Diocese in Europe visit the EU Institutions 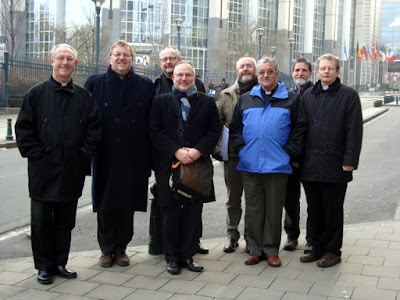 The archdeacons of the Diocese in Europe met together from 28 Feb to 2 Mar in Brussels for prayer and discussion. The 7 archdeacons oversee areas of the diocese on behalf of the bishops, giving support to clergy and congregations and guiding them in their mission and ministry.

During their meeting the archdeacons also met with the Revd Dr Gary Wilton, the Archbishop of Canterbury's representative to the EU, and an assistant priest at Holy Trinity Pro-Cathedral in Brussels, who arranged for them a tour of the European Institutions. The 7 archdeacons are pictured above with Dr Winton outside the headquarters of the European Commission. "We were most impressed with the ministry of Dr Gary Wilton amongst the European Institutions, " said Archdeacon of Germany and Northern Europe, Jonathan LLoyd. As part of their meeting in Brussels, the archdeacons also attended Choral Evensong at Holy Trinity Pro-Cathedral.