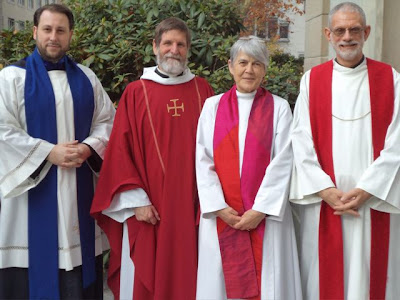 On Sunday 20th November, the Feast of Christ the King, the Revd Sara MacVane was licensed as assistant priest in St Andrew's Zurich by the Archdeacon of Switzerland, the Venerable Peter Potter. Sara served her title curacy in All Saints Rome where she also worked part time at the Anglican Centre in Rome. She then moved to Pas de Calais, where she was priest-in-charge for two years.

Sara speaks fluent Italian, has a working knowledge of French, and will now add German to her language skills. She joins the team in St Andrew's led by the Chaplain, the Revd Canon John Newsome. One of the Readers in the parish, Brother Marcel Benedict, is in the photo above, along with Sara, Fr Newsome and the Archdeacon (in the chasuble). Of course, Sara is the one without the beard!

The website of St Andrew's Zurich, one of the largest and liveliest parishes of the diocese is here. There are daughter churches served from Zurich in St Gallen, Turgi and Zug.

Posted by David Hamid at 17:35
Email ThisBlogThis!Share to TwitterShare to FacebookShare to Pinterest