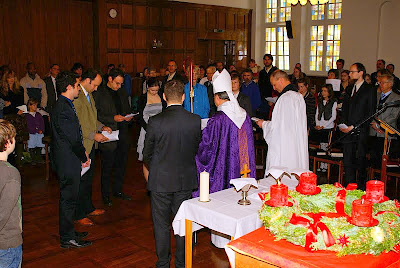 The first confirmation in Leipzig English Church since 1999 was held on Advent Sunday 27 November when I administered the apostolic rite to 3 teenagers and 3 adults.

English priests were first posted to Leipzig in 1868. All Saints Church, which was located in the memorably named Sebastian-Bach-Strasse, was destroyed by allied bombing in World War II. A new congregation was planted in 1995 by the Revd Martin Reakes-Williams, who still serves as chaplain.

Leipzig English Church is a truly international community. There are many Germans who attend (even though the services are in English), but I also met members from Ireland, the USA, Iraq, Canada, Nigeria, Cameroon, and even some from England! The congregation is also supporting one of their members who is in the process of discernment of vocation to the priesthood.

The membership was once largely students, but in recent years the congregation has seen a sizable growth among young families with children. Leipzig English Church is noted in the city as being a place for good biblical preaching. I discovered there is also a talented group of musicians in the congregation, including professionals in the historic Gewandhaus Orchestra (which counts Felix Mendelsohn among its past musical directors), and students at the famous University of Music and Theatre (founded by Mendelsohn). 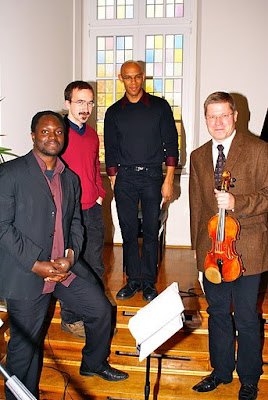 The Churchwardens, Stefan Seidel and Herman Speckman (pictured below behind the Revd Martin Reakes-Williams), are probably among the youngest in the Diocese. 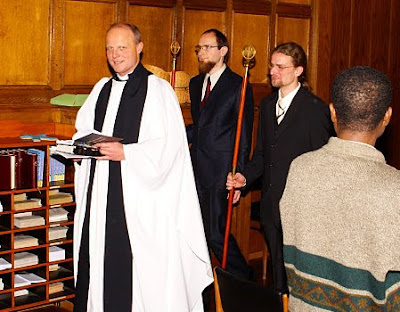 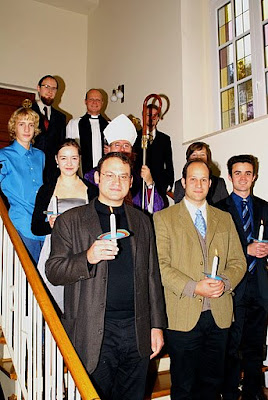 Posted by David Hamid at 23:37
Email ThisBlogThis!Share to TwitterShare to FacebookShare to Pinterest