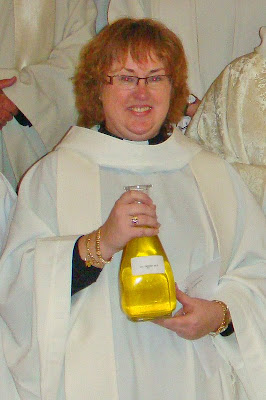 One of our clergy, the Revd Elaine Labourel, Assistant Priest at St Mark's Versailles and St Paul's Chevry, is active in making Anglicanism known among other Christians in France. Elaine is already well known to readers in training in the diocese as she is their principal tutor for their studies. But she also teaches a course on Anglicanism at the Institut Catholique de Paris, (known in English as the Catholic University of Paris).

In cooperation with the Theological Institute of St Sergius and the Protestant Institute of Theology, the Institut Catholique held a colloquium from 6 to 8 March, on the Reception of Vatican II in the Churches. This year marks the 50th anniversary of the opening of that Council of the Roman Catholic Church, by Pope John XXIII.

Largely through Elaine's influence, I was invited to give a paper at that colloquium on the effects of Vatican II in Anglicanism.  I called my presentation: Abattre les murs: Vatican II et la Communion anglicane. Breaking down the walls: Vatican II and the Anglican Communion.