Kermesse, an initiative by a former Chaplain of St Paul's Monaco in 1970 has now grown to be one of the key charity events each year in the Principality. Other founding members 42 years ago were the British Association of Monaco and the St Vincent de Paul Society.

Kermesse is held just before Advent and is a large gathering now coordinated by Anglican, Roman Catholic, Greek Orthodox, and Reformed Churches of Monaco, along with the British Association, bringing together hundreds of volunteer workers. The lively and popular event is a combination of Christmas bazaar, jumble sale, international food court and ecumenical fellowship gathering. This year's Kermesse held on Saturday 1 December raised over €66,000 for the Churches' charities.

St Paul's Monaco continues to play a major role and our own parish volunteers are very much in evidence. In the photo below, the Pasteur of the Eglise Reformée (left) meets with Fr Walter Raymond (3rd from left), in an ecumenical encounter mediated by Papa Noël. 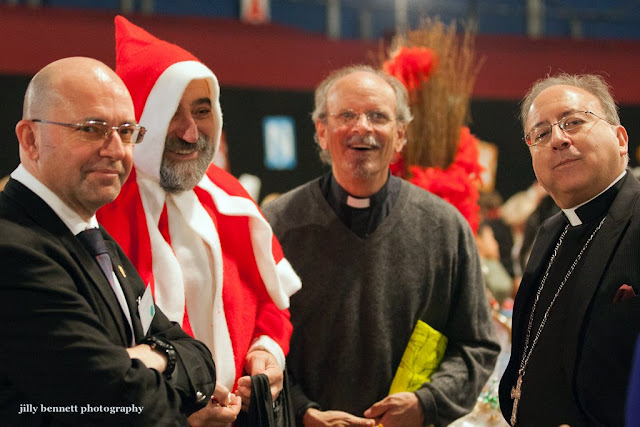 Posted by David Hamid at 09:11
Email ThisBlogThis!Share to TwitterShare to FacebookShare to Pinterest