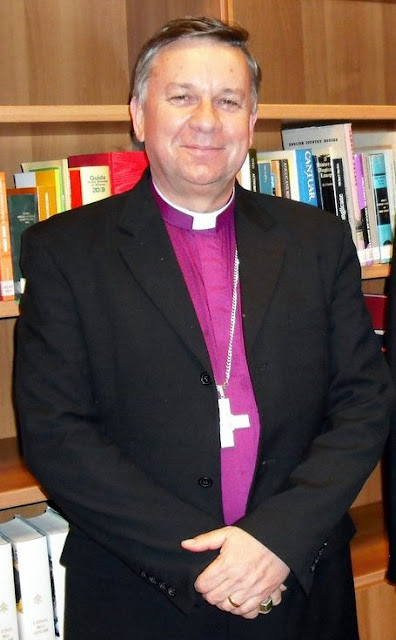 Archbishop David Moxon is currently the of Waikato, Senior of the New Zealand Dioceses, and an Archbishop of the Anglican Church in , and .  He succeeds the Very Revd Canon , previously of and of (). Canon Richardson will retire at Easter, and Archbishop Moxon will take up his appointment in the early summer.  He will remain co-chairman of ARCIC, the Anglican –Roman Catholic International Commission. He is married to Tureiti. They have four adult children.

“I am personally delighted that Archbishop David Moxon has agreed to take up the joint post of Archbishop’s Representative to the Holy See and Director of the Anglican Centre in .  There can be few people in the Communion so well qualified for this work.  Archbishop David has done distinguished service to the Anglican – Roman Catholic dialogue both locally and globally, and brings to this post both a wealth of experience and a range of profound friendships across the confessional frontiers.”

“I feel humbled to be called to the role of Archbishop of Canterbury’s Representative to the Holy See and Director of the Anglican Centre in .  My predecessor Canon , together with Margie his wife, has carried out an extraordinary ministry, taking the Centre on a quantum leap forward.  It is a pleasure and a privilege to build on what they have achieved.

This appointment occurs at a time when ‘receptive ecumenism’ is making its presence felt as an opportunity to engage in honest dialogue about our two churches’ respective wounds, needs and opportunities.  Already there is considerable interest in the potential of such an approach as commended by phase three of the Anglican Roman Catholic International Commission (ARCIC-3).  This appointment also occurs at a time when the International Anglican Roman Catholic Commission on Unity and Mission (IARCCUM) has been restarted.  The atmosphere of our relations in these commissions is positive and hopeful:  we are, I believe, on the cusp of a new kind of engagement and relationship which will focus on attending to each others’ deepest needs and working in solidarity with each others greatest mission challenges.  Jesus’s prayer that we all be one will come about through increasing degrees of communion borne of increasing degrees of companionship and prayer.

The Anglican Centre has been—and will continue to be—an embodiment of these hopes and a place where this vision can be nurtured and demonstrated more and more.  Dialogue that leads to shared mission projects can only facilitate the coming in of the , which is why we journey in hope together.  I look forward to being part of this quest and believe it is a privilege to work on behalf of the Archbishop of Canterbury’s ministry and the Anglican Communion as whole in the time ahead.”

As the Centre is in Rome there are warm and very close links with our diocese in Europe, and we do all we can to support its vital work. Personally I am very pleased to learn of Archbishop David’s appointment. I have known him through our ecumenical work together on Anglican-Roman Catholic relations, especially more recently since his appointment as Co-Chairman of ARCIC and my own appointment as Co-Chairman of IARCCUM, the International Anglican-Roman Commission on Unity and Mission.

The website of the Anglican Centre in Rome is here.

The official press release is here.

Posted by David Hamid at 07:03
Email ThisBlogThis!Share to TwitterShare to FacebookShare to Pinterest