Archbishop of Canterbury's Statement on Election of Pope Francis 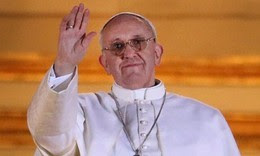 The Archbishop of Canterbury, Archbishop Justin Welby, has offered his warmest welcome to Pope Francis on his election.

“We wish Pope Francis every blessing in the enormous responsibilities that he has assumed on behalf of Roman Catholics around the world.
His election is also of great significance to Christians everywhere, not least among Anglicans. We have long since recognized—and often reaffirmed—that our churches hold a special place for one another. I look forward to meeting Pope Francis, and to walking and working together to build on the consistent legacy of our predecessors. May the love of Christ unite us, and intensify our service in a genuine and fruitful ecumenism that can be a blessing for the Body of Christ throughout the world.
Pope Francis is well known as a compassionate pastor of real stature who has served the poor in Latin America, and whose simplicity and holiness of life is remarkable. He is an evangelist, sharing the love of Christ which he himself knows. His choice of the name Francis suggests that he wants to call us all back to the transformation that St Francis knew and brought to the whole of Europe, fired by contemplation and closeness to God.
As I begin tomorrow a prayer pilgrimage toward my own inauguration as Archbishop in Canterbury next Thursday, Pope Francis will be much in my own prayers, as he will be throughout the coming months and years.”

The Archbishop of York will represent the Archbishop of Canterbury at the installation of Pope Francis on Tuesday. I have been asked to be part of the delegation in my capacity as Anglican Co-Chairman of IARCCUM, the International Anglican-Roman Catholic Commission for Unity and Mission, along with  Archbishop David Moxon, the Anglican Co-Chairman of ARCIC, the Anglican-Roman Catholic International Commission, (the theological dialogue).

It will be a busy week. We return from Rome on Wednesday and go straight to Canterbury for another installation the next day, that of the Archbishop of Canterbury, at which I have been asked to host the guests from the Orthodox Churches.

The Church of England has produced this prayer for the new Bishop of Rome:

Almighty God,
shepherd of souls,
we pray for Francis I chosen to be Pope:
Guide him by your Spirit,
give him grace to lead people in prayer and zeal
and to follow in the footsteps
of Jesus Christ your Son our Lord.

Posted by David Hamid at 10:37
Email ThisBlogThis!Share to TwitterShare to FacebookShare to Pinterest