Report from the National Readers' Conference: a view from the Diocese in Europe

Jan Waterschoot, a Reader in Eindhoven, Netherlands, was one of five Readers who attended a recent "national" gathering for Readers held from 4 - 6 April. Jan has written the report below:

About a hundred and fifty Readers met in the first weekend of April in Milton Keynes for the bi-annual Reader's Conference, including the Annual General Meeting of the Central Readers' Council (CRC). At the Annual Meeting our Diocese was represented by Angela Mirani (Italy) who also is a member of the Executive of the CRC, and Jan Waterschoot (Netherlands). For the rest of the Conference they were joined by Linda Brooke (France), Brenda Juntunen (France) and Linda Cade (Majorca).

Calling this meeting a 'national' Readers Conference was about the only time during the weekend that it could have looked as if Readers from outside England were not part of it all. Time and time again it was made clear that Wales, the Isle of Man and of course the 44th Diocese were very much part of everything! With five delegates (more than many other Dioceses had sent!) the Diocese in Europe was very well represented at this Conference.

The Conference had two key speakers. The first one was the chairman of the CRC: the Right Reverend Robert Paterson, Bishop of Sodor and Man. He spoke on Readers as 'Servants of the Word'. He explained how many other lay ministries are developing alongside Reader ministry. Several dioceses find due to this development that the title 'Reader' is out of date and should be replaced by for example 'licensed lay minister'. The Bishop also spoke about the need for adequate theological training for Readers and a national standard for this training. Another subject he touched upon was: What is a Reader really? A person running around from church to church to keep them open and take more and more services while the numbers of priests are going down? Or rather lay-theologians who can teach and preach the Word, not even necessarily in churches but everywhere, in public, in work places. Why should there be a sharp line between lay and ordained ministry. Should they not both be integrated in the total ministry of the Church?

The second key speaker was The Reverend Father Nicholas King SJ. He opened up some Bible pieces in his own special way reading to his audience in English from a Greek Bible. Father Nicholas has written a highly acclaimed translation of the Bible about which Archbishop Desmond Tutu wrote: "The translation hits you between the eyes". Father Nick explained to the Readers the Biblical Roots of Christian Unity, especially from Acts. But he also showed where to find the moments of disunity in Acts already (certainly when money is around!) and in other parts of the Church like in Corinth. He journeyed through the text to show where social, cultural and racial tensions were around and how to overcome them by love, by living as sisters and brothers. In his last address he went through the Gospel of St John, going deeper into the mystery, showing that the Message of God is a Message of Love. God loves this world so much that he gave his only Son to die for our sins. What else can we do than follow his example and love God and one another. And in moments of doubt or disunity: keep our eyes on Jesus, look to the Father and listen to the Paraclete; love one another.

It was a good meeting! Wonderful worship, lots of friendship and fellowship. Readers sharing among one another about their ministry and charging their batteries again to keep up the good work. 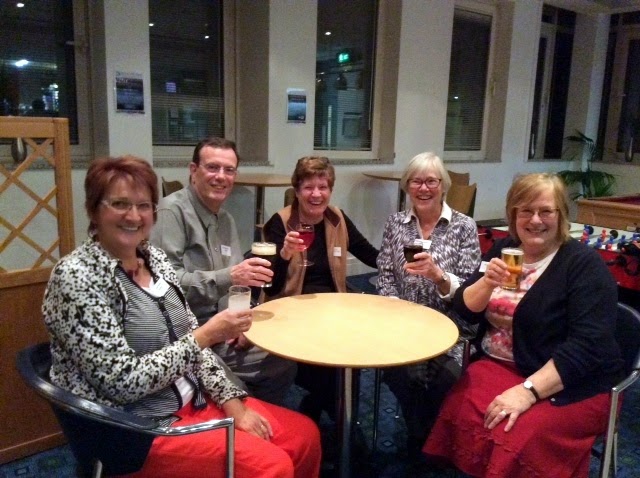 Posted by David Hamid at 12:18
Email ThisBlogThis!Share to TwitterShare to FacebookShare to Pinterest