For the last couple of years, the refugee situation has been on the agenda of the Diocesan Synod. At this last Synod held in Cologne from 13 to 17 June, we continued our education and reflection but this time returning to the causes of the present crises. To lead our discussion we were privileged to hear from Dr Harry Hagopian who shared perspectives on the "shuddering political and demographic upheavals in the Middle East and North Africa (MENA) over the past five years" which are producing the large numbers of refugees.

Dr Hagopian is a lawyer who holds a doctorate in Public International Law and an LL.M in Alternative Dispute (Conflict) Resolution. He is the Middle East Advisor for the Catholic Bishops’ Conference in England & Wales and works also with the Vatican, Lambeth Palace, Majlis El-Hassan and the Royal Institute for Inter-Faith Studies in Jordan, Minority Rights Group International in England, as well as with think tanks, universities and institutes across Europe and North America.

An Armenian from Jerusalem, Harry worked until 2001 as Executive Director of the Middle East Council of Churches in Jerusalem where he also held the position of Executive Secretary of the Jerusalem Inter-Church Committee. He was able also to share insights into the circumstances of the mosaic of Christian communities that have been indigenous to this troubled region since the birth of Christianity itself, circumstances which are indeed very complex.

It was a stirring, passionate and erudite presentation which left us with much to ponder and much to pray for.

Harry prepared a piece entitled "An Anglican encounter over the MENA region in Germany" that is posted on his website. The article is here: 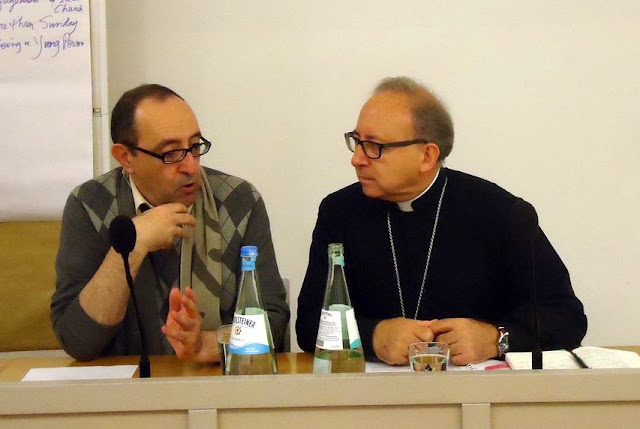