Toothpaste - an essential for detained refugees/migrants in Athens 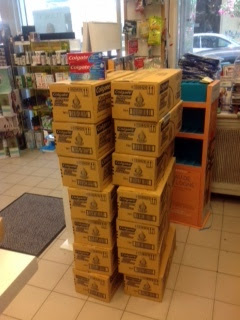 In Athens, with the help of the pharmacist Maria Karayianni, a thousand tubes of toothpaste  have been obtained to add to the equivalent male hygiene packs provided by the USA Christian NGO Samaritan Purse. The packs will be delivered to a Detention Centre for refugees/migrants.This initiative arose from a conversation between the Police Officer directly responsible for those incarcerated in the Detention Centre and our Chaplain in Athens, Canon Malcolm Bradshaw. The Officer asked whether we had access to such packs.

Over the past four months the Athens' Chaplaincy has been providing a cooked meal each week at the Detention Centre. It has also provided footballs,basketballs and ping pong balls to use in the recreation yard. The Chaplaincy is grateful to all who have sent donations enabling it to do this work. Apparently the Officer was near to tears when he heard that such a provision could be made.

The men in the Detention Centre were described by the Officer as 'being those whom the authorities do not know what to do with'.

Another example of our parish in Athens filling in the gaps in provision for those caught in this refugee limbo.
Posted by David Hamid at 08:49
Email ThisBlogThis!Share to TwitterShare to FacebookShare to Pinterest