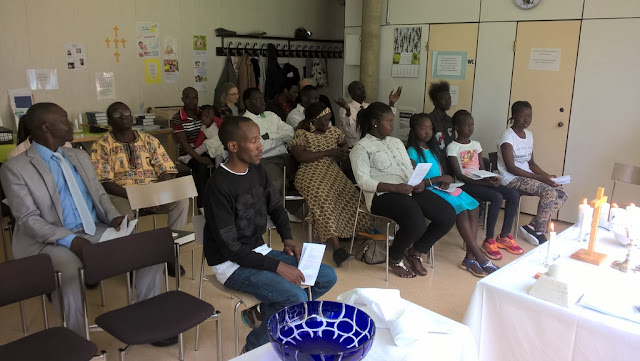 Sunday was a memorable day in the life of the Anglican Church in Finland. Five children from two Sudanese refugee families were baptized in St Nicholas's regular Sunday Eucharist in Espoo. This small community gathers every other Sunday for Eucharist in a small room in Tapiola (Lutheran) church.

The Espoo congregation is quite used to songs in Swahili but on Sunday the room was filled with songs in Arabic as the Revd Amos Manga (priest-in-charge of the White Nile congregations in Finland) presented five children for baptism. Muntase, Mawahib and Manar arrived in Finland last winter. Muntaser (2000) and Mawahib (2001) were born in Khartoum before the family had to flee to a refugee camp in Cairo. Manar was born in the camp in 2006. Ten years later they have now arrived in Finland and have received pastoral support from Fr Amos. Other candidates were Yasine, who was born in Khartoum in 2001, and her sister Fairuz , who was born in Cairo in 2006.

The Revd Tuomas Mäkipää, the chaplain of St Nicholas, Helsinki (which includes Espoo) presided at the service, while Fr Amos did the actual baptism in Arabic. In such situations in the diocese in Europe we find that the Church of England's liturgical texts must (and indeed can!) be adapted for various kinds of situations. It was a moving service, signifying not only the safe ending to a perilous journey these children have been on already, but a new beginning on the journey of life in Christ.

At the end of the service the newly baptized were given a lighted candle depicting the patron saint of the Helsinki Chaplaincy, St Nicholas the Wondermaker. St Nicholas is the patron of children. He is depicted on the candle with children in a tub and his hand raised for a blessing. While handing out the candles Fr Tuomas reminded the congregation that according to one legend, St Nicholas helped children to have a better future by giving gifts. These were enough to give a better future for these children and their families. The other legend is the one where St Nicholas raised three children from the dead thus giving them back their lost future and adulthood. Fr Tuomas noted that those fleeing from their homes and homeland today want to do precisely the same thing; to give their children better chances in life and to restore what has been lost. 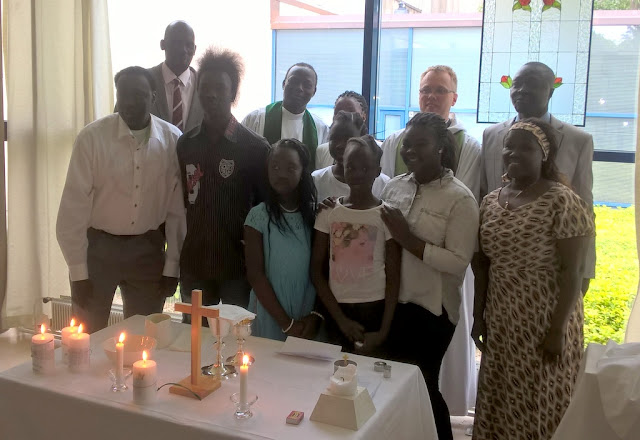 Here is a short video clip of the opening song.


Posted by David Hamid at 11:43
Email ThisBlogThis!Share to TwitterShare to FacebookShare to Pinterest