"We are not heroes; we just do what our Lord expects" - Patriarch Ignatius Aphrem II of Syria 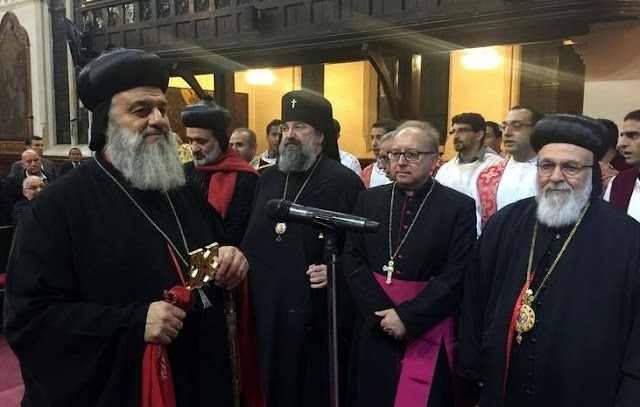 It was a privilege on Sunday to join in a prayer service held at St Mark's Coptic Orthodox Church, led by His Holiness Patriarch Mor Ignatius Aphrem II. His Holiness is in London in these days for an apostolic visit. He is the 122nd successor to St Peter in the Apostolic See of Antioch and All the East, and the Patriarch of the Syriac Orthodox Church whose headquarters are in Damascus. His Holiness is accompanied on his visit by their Eminences Archbishop Mor Severius Hawa, Archbishop of Baghdad and Basra and Mor Theophilus George Saliba, Archbishop of Mount Lebanon and Tripoli.

The service was a joyful gathering of the bishops, clergy and people from three of the Oriental Orthodox Churches, the Syriac, the Coptic and the Armenian. His Eminence Archbishop Elisey of Sourozh, the Russian Orthodox Archbishop in London was also in attendance. 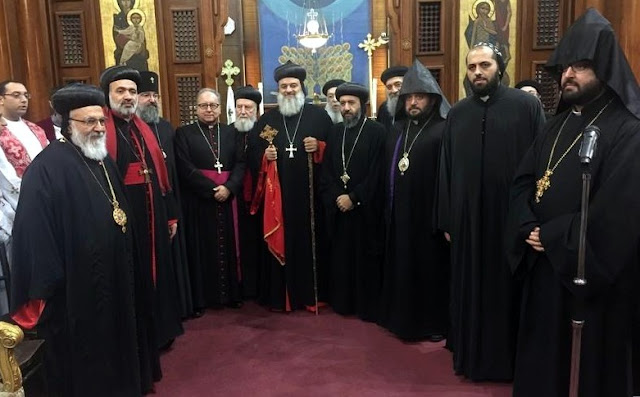 His Holiness was born in Qamishli, a city on the border of Syria and Turkey, just about 70 kilometres from a monastery I stay in for retreat and prayer, Mor Gabriel, in the Tur Abdin area of Turkey. He spoke of the tragedy of the war, violence and terrorism in his country and in neighbouring countries of the Middle East. Probably close to 500,000 Syrians, of all religions and confessions, have been killed in the conflict. (We know of the close to 5 million Syrians who have fled the country, and over 6 million internally displaced).

Despite the high price Christians pay for remaining in their ancient homelands in the Middle East, the Patriarch in his address spoke movingly of their faith. He said, "We have been here for 2000 years as Christians, and even longer as the indigenous people of these lands. We remain here because the people need a sign of hope when so much has been destroyed, so much lost, even lives. We stay, not because we are heroes, but because this is what our Lord expect." He quoted our Lord in St John's Gospel, (15.20) "Remember what I told you: ‘A servant is not greater than his master.’If they persecuted me, they will persecute you also'".

"So", His Holiness said,  "the Church stays, because we do not abandon the sheep. We are a permanent presence among them". Fittingly the host for the evening, His Grace Bishop Angaelos of the Coptic Church, presented His Holiness with an icon of Christ the Good Shepherd.

Our sisters and brothers of the Syriac Orthodox Church have much to teach us about the cost of discipleship.

Posted by David Hamid at 11:09
Email ThisBlogThis!Share to TwitterShare to FacebookShare to Pinterest