﻿﻿
﻿
Our parish of All Saints in Rome keeps busy during the Week of Prayer for Christian Unity. Last night, on the second day of unity week, the choir sung Evensong in the Papal Basilica of St Paul's Outside the Walls. I was present to preside and preach at the service. The Associate Director of the Anglican Centre in Rome, the Revd Marcus Walker, assisted me.
It is a moving experience to read and and then to preach on the words of the Apostle (II Corinthians 5.14-20 was one of the lessons) just a few metres from where, according to Christian tradition, his earthly remains lie. The basilica, built by Constantine in 324, rises above the place venerated as the site of his burial. St Paul who was of course Saul of Tarsus, was beheaded in Rome sometime in the reign of Nero, likely between 65 and 67 AD. As he was a Roman citizen, he was able to be buried on this site about 2 miles from the heart of the ancient city, where there was a necropolis for citizens. St Paul lies in a tomb several metres below the high altar. There is an inscription on a slab of marble which lies on top of his sarcophagus. It bears the inscription Paulo Apostolo Mart (Apostle Paul, Martyr).
We Anglicans were welcomed most warmly by the Benedictine monks who live at St Paul's. The Abbot, the Most Revd Roberto Dotta, invited us to a reception following. The Archpriest of St Paul's, Cardinal James Michael Harvey, was also present for the service and welcomed us. Anglican liturgy and spirituality is at its heart Benedictine, so we are all very much at home in each other's company. Our unity in Christ is felt very deeply indeed.


At the conclusion of evensong, the monks chanted the ancient Latin hymn to the Apostle:
Pressi malorum pondere te Paule, adimus supplices, qui certa largus desuper, dabis salutis pignora.
(Pressed by the might of the wicked, thee, O Paul, we approach supplicant, who are lavish to give from above the certain assurances of salvation). 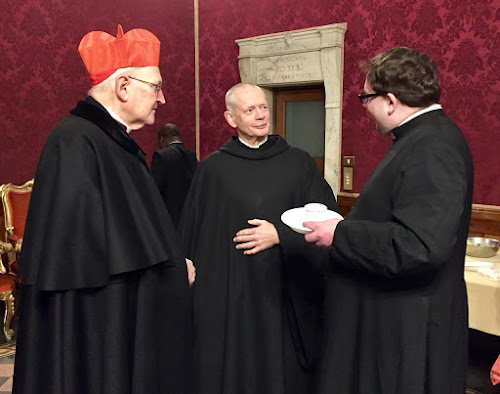 Posted with Blogsy
Posted by David Hamid at 09:48
Email ThisBlogThis!Share to TwitterShare to FacebookShare to Pinterest