The Revd April Almaas: I stand here for justice 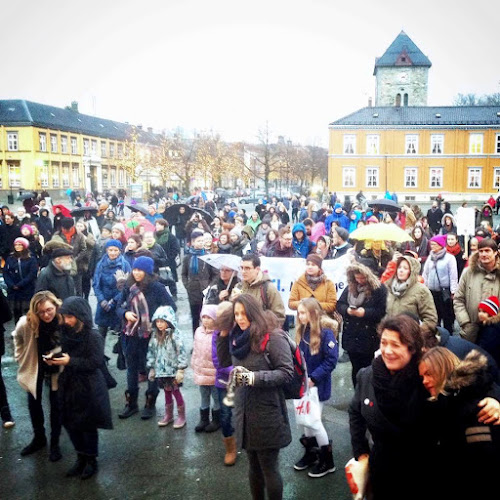 "I am here today in solidarity with all who are oppressed. I stand here for justice". The words of the Revd April Maja Almaas.

April is a priest of our Diocese in Europe, who serves the Anglican congregation in Trondheim, Norway. She participated in a march in that city last Saturday, joining with millions of others around the world. (It is estimated that in the USA alone more than 4.5 million marched. Others marched around the world, from Iraq to Antarctica.) "As a multi-ethnic American and a Christian I felt that it was important to speak out", said April.

In addressing the crowd, April recalled that this march was in a long line of such historic demonstrations, from the first march for women's voting rights in Washington in 1913, to that led by Martin Luther King against racism 50 years later. Along with her sisters around the world, April wished to declare that the rhetoric used in the US election campaign was unacceptable, that many have been discriminated against, and that such discrimination is not right. The tone of the march was not an anti-Trump political demonstration, but a peaceful witness for the fundamental and basic human rights of all.

In her speech, April cited the words of the US author, Lillian Smith:

“Without words, it comes
And suddenly, sharply,
one is aware of being separated
from every person on one’s earth and every object,
and from the future
and even, a little,
from one’s self.
A moment before one was happily playing;
the world was round and friendly.
Now at one’s feet there are chasms
that had been invisible until this moment.
And one knows, and never remembers—
how it was learned,
That there will always be chasms,
and across the chasms, will always be those one loves.”

April's powerful speech continued, echoing sentiments of many of us across Europe, "Around the world nationalism is on the rise, Fear sown, hatred harvested. Wrong skin. Wrong creed. Wrong documents. Wrong place—wrong time. Walls are being built. Discrimination legalized. Brutality accepted. Ism’s are being taken out of their closets, dusted off and being worn again—racism, sexism, heterosexim, classism, ableism". Turning again to Smith's words, “Suddenly, sharply, one is aware of being separated from every person on earth and every object, and from the beginning of things, and from the future, and even a little from one’s self.”

April challenged her hearers to ponder, "How has it come to this? That we are standing here in bondage, trapped on our islands of privilege and need? With chasms at our feet—separating us from our sisters and our brothers, from the beginning of things”—which is God—who created each and every one of us in the very image of God? Today, I am asking all of us to extend our arms out from our islands, across the chasms that separate us, and to grasp hands in solidarity with all who are oppressed.This is not any easy task. The path towards justice is always difficult, but it is also, always the right way to go".

Thank you for your witness, April. "Amen" is all I can add.

Posted with Blogsy
Posted by David Hamid at 08:59
Email ThisBlogThis!Share to TwitterShare to FacebookShare to Pinterest