CTBI - not simply about Britain and Ireland! 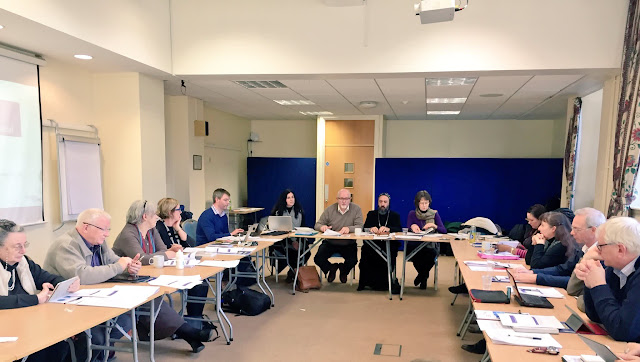 Why is a bishop in Europe a trustee of the Churches Together in Britain and Ireland (CTBI)? A good question. Of course the basic reason is because the Church of England is a member of this ecumemical instrument. But beyond this, the work of CTBI takes on many international dimensions, not least in its advocacy and support for refugees and migrants.This is an issue which transcends national or regional boundaries as we in the diocese are well aware. (It was a visit by CTBI to Greece, hosted by our own Fr Malcolm Bradshaw back in 2015 that was a catalyst for increased focus, both in churches and in government circles to the refugee crisis). CTBI also has historic and fruitful partnership relations with Churches in the Middle East (where Christians must not slip from our sight in the midst of current conflicts), as well as in other regions such as Sri Lanka and China. So CTBI is itself a body with a global focus, even as it seeks to serve the member Churches, including our Church of England, with their historic roots on the islands of Great Britain and Ireland.
A meeting of the trustees has just concluded in Leeds. The agenda ranged from communication of the Churches' work in a digital age, to refugees and migrants, to theological questions related to inter-religious dialogue. Also, we did some work on an exciting proposal to bid for the next General Assembly of the World Council of Churches (WCC) in 2021 to be hosted by the British and Irish Churches in Glasgow. We hope that the WCC Central Committee will find our proposal to be an attractive one when it comes to decide the venue at its next meeting.
Churches in our Diocese in Europe will find a host of very useful resources, such as Lent courses, theological reflections, and ideas for programmes and action on the CTBI website which can be found here.
The Moderator of CTBI is my good friend and colleague Bishop Angaelos of the Coptic Orthodox Church.

Posted with Blogsy
Posted by David Hamid at 08:00
Email ThisBlogThis!Share to TwitterShare to FacebookShare to Pinterest