An exhilarating Week of Prayer in Venice 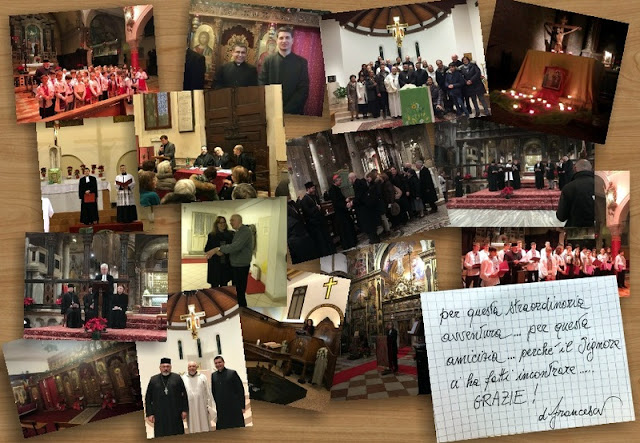 As readers of Eurobishop will know, the Week of Prayer for Christian Unity 2018 has just come to a close. In Venice it has truly been an exhilarating experience, reports the Chaplain Fr Malcolm Bradshaw.

During the course of the week services were held in thirteen churches of different denominations and all well attended – up to eighty people plus. An exchange of pulpits occurred with no hesitation for an elder of the Waldensian/Methodist Church to preach in the Greek Orthodox Cathedral, a Lutheran pastor in St Mark’s Basilica, a Roman Catholic priest in the Romanian Orthodox Church.

Evensong was held in St George’s Anglican Church and was honoured by the presence of the Ecumenical Secretary of the Patriarch for Venice, Don Francesco. He delivered the sermon. Local Catholic clergy and religious were in attendance. Fr Malcolm was invited to preach in the Roman Catholic parish church of St Hilary, Malcontenta, on the mainland from Venice. The service was supported by a choir of young people and adults. In the congregation were members of the Focolare movement. Afterwards a small reception was given, in which, to his surprise, Fr Malcolm received a hamper of local produce – preserves, wines, biscuits, salami and an apron for the kitchen. The Week of Prayer for Christian Unity has its benefits in ways unexpected! The above photograph is a selection of shots from the various services with an expression of thanks by the Ecumenical Secretary.

This year, the Anglican Church holds the presidency for the Ecumenical Council of Venice. This is largely due to the loyal and long commitment to the Council of Mr David Newbold, Churchwarden at St Georges. This year this Council is celebrating its 25th anniversary.
Posted by David Hamid at 10:00
Email ThisBlogThis!Share to TwitterShare to FacebookShare to Pinterest