Unity in Christ celebrated in Hungarian, Arabic and English

It was a joy to join Fr Frank Hegedűs at the Week of Prayer for Christian Unity service in the beautiful St Stephen's Basilica in Budapest on Sunday 21st January. Cardinal Péter Erdő presided and representatives of more than ten church communities from across Hungary and the world participated. 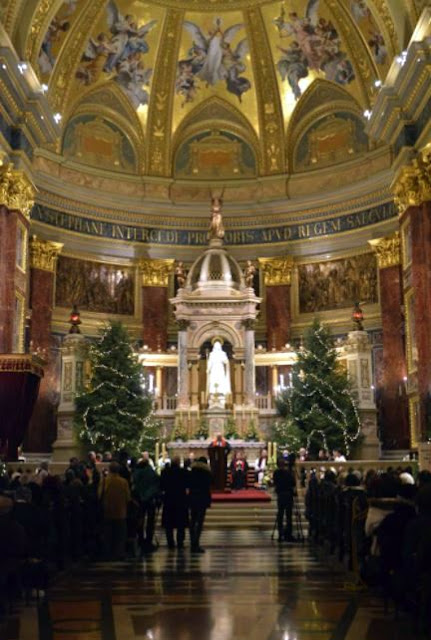 There was a significant representation of Christians from the Middle East including Bishop William Shomali the Latin Rite Patriarchal Vicar in Jordan, and a very dear friend for many years, Archbishop Paul Sayah, the Vicar General of the Maronite Patriarchate based in Beirut. Archbishop Paul is also one of the IARCCUM bishops-at-large. (IARCCUM is the International Anglican-Roman Catholic Commission for Unity and Mission).

Most Christians in Hungary are Roman Catholic. The Reformed and the Lutheran Churches are significant minorities. Interestingly the Reformed (Calvinists) in Hungary have bishops! I was very moved to have been invited not only to lead a prayer at the service, but also to give the final blessing.

Posted by David Hamid at 14:50
Email ThisBlogThis!Share to TwitterShare to FacebookShare to Pinterest