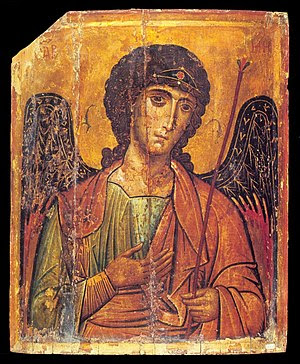 Today is the Feast of St Michael and All Angels and two churches of the diocese in Europe, both in France, celebrate their patronal festival.

St Michael's Paris is a large and busy multinational congregation (5 services on Sunday, including one in Tamil and one in French) in the heart of the capital, just a few hundred metres from the Elysée Palace. It was founded in 1834, originally as the British Embassy Church, but is now a home to people from over 30 nations. It is a community active in mission and outreach and also has a vibrant ministry to young adults and students. The Revd Philip Mounstephen is the chaplain. He is assisted by the Revd John Moore, the assistant curate, and two lay ministry assistants, Liz Houghton and Paul McIntosh. Check out the website of St Michael's Paris, here.

St Michael's Beaulieu-sur-Mer is at the other end of the country on the Riviera between Nice and Monaco. It also serves a community composed of a wide range of nationalities from British to Icelandic. Services began in 1891 and the present building was completed in 1894. St Michael's is a centre of cultural and musical life in Beaulieu and the home also to a congregation of the Church of Denmark which worships there once a month. Excellent relations have been nurtured over the years with local Roman Catholic authorities; the Priest-in-charge, the Revd Canon Dr Roger Greenacre, a scholar of Anglican-Roman Catholic relations was honoured by the French Government in 1998 which appointed him Officier de l’Ordre National du Mérite for his contribution to ecumenism.  The website of St Michael's Beaulieu-sur-Mer is here.

Posted by David Hamid at 15:08
Email ThisBlogThis!Share to TwitterShare to FacebookShare to Pinterest