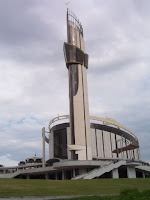 I was among about several thousand people gathered this morning in the Shrine of the Divine Mercy south of Krakow, Poland, for a eucharist presided by Cardinal Stanislaw Dziwisz of that city, to open the International Meeting for Peace, sponsored by the Community of Sant'Egidio. (I have the privilege of representating the Archbishop of Canterbury at the gathering). At 12 noon Pope Benedict XVI joined us by live video connection! He gave this greeting to the various Christian Churches and representatives of world religions present for the meeting:

"I now wish to convey my heartfelt greetings to the participants of the International Congress "People and Religions" in Krakow, which is held on the topic "Faiths and Cultures in Dialogue". A number of personalities and representatives of different religions - invited by the Archdiocese of Krakow and by the Community of Sant'Egidio - are assembled to pray for peace, 70 years after the outbreak of World War II. We are compelled to remember the tragic events that sparked one of the most terrible conflicts in history, which caused tens of millions of dead and so much suffering to the beloved people of Poland; a conflict that unleashed the tragedy of the holocaust and the extermination of scores of other innocent people. May the memory of these events drive us to pray for the victims and for those who still bear wounds in their bodies and in their hearts. May it also stand as an admonishment to all, not to replicate such barbarity but rather to intensify efforts in building long-lasting peace in our times marked by conflict and contraposition, conveying, especially to younger generations, a culture and lifestyle full of love, solidarity and esteem for the other. In this perspective the contribution religions can and must give is particular important for promoting forgiveness and reconciliation, opposing violence, racism, totalitarianism and extremism, which debase the image of the Creator in man, removing the vision of God, and ultimately leading to contempt for man himself. May the Lord help us to build peace, starting from mutual love and mutual understanding".

Posted by David Hamid at 14:27
Email ThisBlogThis!Share to TwitterShare to FacebookShare to Pinterest