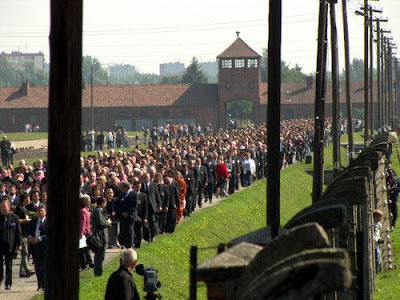 It is very difficult to do put into words my feelings on being confronted today with the horror of Auschwitz-Birkenau. Passing under the gates with the cynical words “Arbeit Macht Frei” was chilling as I entered the site of the most horrific crimes ever committed by human beings. The enormous factory of evil, torture and death is just too hard to describe. But it is very real; the holocaust happened, and it is forever on the conscience of mankind.

Thousands of people walked in silence along the railway track to join the representatives of the major religions for the ceremony of remembrance. We walked to proclaim to the world that never again can we sink into such an abyss of hatred and depravity.

Representatives of Christian Churches, the Jewish community and of other faiths, Buddhists, Hindus and Muslims, laid 21 wreaths before commemorative plaques, in what is the largest cemetery in history. It is estimated that close to 4 million people, mostly Jews, died in this immense complex of murder. I laid a wreath on behalf of Anglicans.
Former Chief Rabbi of Israel, Israel Meir Lau, a holocaust survivor, reminded us that there were three groups associated with this monstrous crime: the Nazis and their collaborators, the victims, and those who said and did nothing. Kyrie eleison.
.
Posted by David Hamid at 22:35
Email ThisBlogThis!Share to TwitterShare to FacebookShare to Pinterest