International Meeting for Prayer for Peace in Krakow and Auschwitz-Birkenau 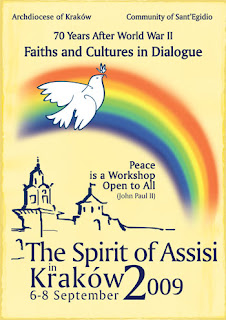 On Saturday I leave for Krakow, Poland to take part in an international meeting of prayer for peace, sponsored by the Sant'Egidio Community, a lay movement within the Roman Catholic Church, and the Roman Catholic Archbishop of Krakow, Cardinal Stanislao Dziwisz, (who was the former Secretary of Pope John Paul II). The meeting runs from 6 to 8 September.
This is a further gathering in “the spirit of Assisi”, continuing the movement begun in 1986 when Pope John Paul II convened a historical meeting of leaders from around the world and from the major world religions in the city of St Francis, to pray for and to promote mutual understanding, dialogue, and cooperation towards peace.

This year's meeting is at a crossroads of European history, shortly after the 70th anniversary of the outbreak of World War II, when Nazi Germany invaded Poland on 1 September 1939. We will be participating in an interfaith pilgrimage to the Auschwitz-Birkenau death camp as a sign of reconciliation and peace and a symbol of a radical rejection of violence and war as a way of solving international conflicts.

More than 10 Roman Catholic cardinals, as well as leaders from Orthodox, Oriental, Anglican, Lutheran and other Churches will be present. Jewish leaders will include the Chief Rabbi of Israel, Yona Metzger. A number of Muslim leaders will be present from Indonesia, India, Egypt, Morocco, Turkey, Lebanon, Ivory Coast, Qatar as well as representatives of Buddhism and Hinduism. Representatives of many heads of state and goverment are also expected.
During the meeting I will be privileged to participate in a dialogue panel entitled "70 Years After World War II, War is Not a Destiny", chaired by Cardinal Roger Etchegaray, the Vice Dean of the College of Cardinals.
I have never been to Auschwitz, and I can honestly say that it is not a trip that I look forward to.
"May there be abundant peace from heaven and life for us and for all people" --From Kaddish, the prayer of a Jewish mourner. (See Common Worship: Daily Prayer pg 406)

Posted by David Hamid at 23:53
Email ThisBlogThis!Share to TwitterShare to FacebookShare to Pinterest