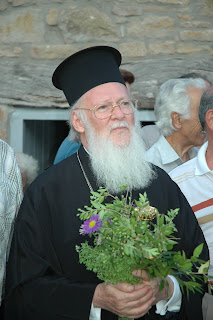 This year Eastern and Western Christians celebrate the Lent-Easter cycle on the same dates. The first Sunday in Lent is observed by Orthodox Christians as "the Feast of Orthodoxy". It originally commemorated the end of iconoclasm in the 9th century, but has come to celebrate more generally the maintenance of the true faith.

The Ecumenical Patriarch (photo left), His All Holiness Bartholomew I, has published an encyclical letter on the occasion of the first Sunday of Lent which gives strong support to the ecumenical movement and dialogue. He writes, "It is not possible for the Lord to agonize over the unity of His disciples and for us to remain indifferent about the unity of all Christians". The Patriarch is addressing those, particularly within his own Church, who oppose theological dialogue with other Christians because they feel it is a denial of the truths of the faith. He states in the encyclical, "The truth does not fear dialogue, because truth has never been endangered by dialogue".

Patriarch Bartholomew reminds Christians of our task to influence and transform the world, to provide a witness to the world of the life-giving breath of our faith."Thus, we must first converse as Christians among ourselves in order to resolve our differences, in order that our witness to the outside world may be credible", he states in the encyclical. "Our endeavors for the union of all Christians is the will and command of our Lord, who before His Passion prayed to His Father “that all [namely, His disciples] may be one, so that the world may believe that You sent me.” (John 17.21)"

The Ecumenical Patriarch of Constantinople (the Byzantine name for modern day Istanbul) is the honorary and spiritual head of the Orthodox Church throughout the world. The full text of his encyclical can be found here. (Photo Credit: Nikolaos Manginas).
Posted by David Hamid at 22:25
Email ThisBlogThis!Share to TwitterShare to FacebookShare to Pinterest