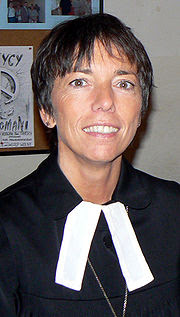 Some shockwaves have hit the European ecumenical scene this past week. Members of our diocese in Germany will be particularly aware of this situation, as it has been widely covered in the German media.

Bishop Margot Kässmann resigned her post as the head of the German Protestant Church, the EKD (Evangelische Kirche in Deutchland) on Wednesday 24 February. She was found driving with over 3 times the legal alcohol limit in her blood after she drove through a red light on the previous Saturday. The Council of the EKD laments her decision and felt that the incident in question should not be grounds for resignation, and that as a result the Church has lost a “fascinating religious personality”.

German public opinion is divided about her resignation. Some feel that the 51 year old former bishop of Hanover has made the right choice as a moral leader. Others feel that she should be forgiven according to Christian principles.

The EKD is a federation of 22 Lutheran, Reformed and United Protestant Churches, with about 25 million members. The Church of England has an agreement of Eucharistic hospitality with the EKD, through the Meissen Agreement. Bishop Kässmann was the first woman and the youngest person ever to head the EKD, and is regarded as one of the most prominent female Church leaders in the world.

Our diocese participates in the official instrument of the ecumenical relationship between the Church of England and the EKD: the Revd Simon Hobbs, Chaplain of All Saints Cologne and St Boniface Bonn is our Diocese in Europe representative on the Meissen Commission which oversees the relationship.Your prayers are encouraged for our ecumenical partners in the EKD during these upsetting times.
Posted by David Hamid at 21:57
Email ThisBlogThis!Share to TwitterShare to FacebookShare to Pinterest