Selection and Training of Minority Ethnic Priests and Deacons in Europe 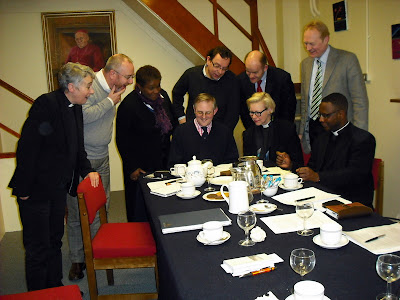 Participants in the consultation were the Venerable Jonathan Boardman (Archdeacon of Italy and Malta), the Revd Philip Mounstephen (the chaplain of St Michael’s Paris), Ms Sonia Barron (Archbishops’ Advisor for Minority Ethnic Anglican Concerns), the Revd Dr Ian McIntosh (Eastern Regional Ministry Course, where many of our ordinands train), the Revd Julian Francis (National Training Co-ordinator for Minority Ethnic Anglicans), the Revd Ben Enwuchola (Nigerian Chaplain in London), and the Revd Deacon Frances Hiller and myself from the Ministry Team.

The consultation identified many areas of challenge for further work in our diocese, including:
It was a useful day, but just a beginning, recognising the scope for further reflection and avenues for possible action.
Posted by David Hamid at 18:21
Email ThisBlogThis!Share to TwitterShare to FacebookShare to Pinterest