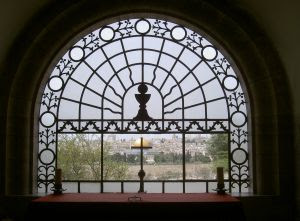 The Churches of Jerusalem have prepared the material for the 2011 Week of Prayer for Christian Unity which will be observed from 18 - 25 January. A phrase from the Acts of the Apostles (2.42), "One in the apostles’ teaching, fellowship, breaking of bread and prayer," has been chosen to be the theme by representatives of the Roman Catholic, Lutheran, Anglican, Orthodox, Syrian, Armenian and Melkite Churches in the Holy City. The Week of Prayer is jointly sponsored by the World Council of Churches (WCC) and the Roman Catholic Church.

Jerusalem is the mother church of all Christians. The 2011 material encourages a divided Christendom to rediscover the values that bound together the early church in Jerusalem, and to seek a renewed commitment to unity based on the experience of the first Christians. WCC General Secretary Revd Dr Olav Fykse Tveit says,


"For Christians in Jerusalem, who live in continuity with the apostolic community of Jerusalem, the mother church of us all, such unity entails prayer, reflection and a cry arising within a context of despair and suffering. Together with them we trust that God is ever vigilant as we pray for peace and justice for all inhabitants of the Holy Land."

Most of the congregations in the Diocese in Europe already join with Christians of other tradtions in celebrating the Week of Prayer each year. Perhaps those who have not taken advantage of this ecumenical opportunity might begin to make contact with neighbouring churches to begin some joint planning for January 2011.

Resources, including biblical reflections and prayers for each of the eight days, are available in English, French, Spanish, Portuguese and German on the website of the World Council of Churches.

Image via Wikipedia
Posted by David Hamid at 01:30
Email ThisBlogThis!Share to TwitterShare to FacebookShare to Pinterest