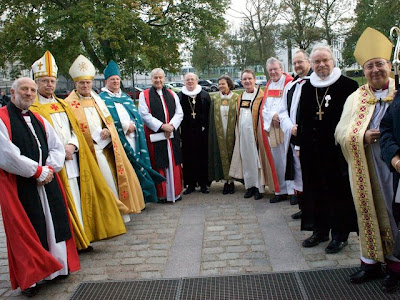 Ecclesiastical history in Northern Europe was made on Sunday 3 October. After close to 500 years of separation, visible communion has been restored between the Anglican Churches of Great Britain and Ireland and the Church of Denmark. On Sunday 3 October, following a Eucharist in Vor Frue Cathedral in Copenhagen, officials of the Danish Church signed the Porvoo Agreement.  All the Lutheran Churches of the Nordic and Baltic countries (except the Evangelical Lutheran Church of Latvia) have now signed this ecumenical statement which brings those Churches into a living relationship of shared life and mission, including the interchangeability of ministers. The Church of Denmark comprises 10 dioceses in Denmark itself and one in Greenland. There are 2,200 parishes served by about 2,400 priests.

The weekend celebrations began with a service of Evensong on Saturday in St Alban's Anglican Church in Copenhagen. I welcomed the international gathering to the service which the Venerable Jonathan LLoyd, Chaplain of St Alban's and Archdeacon of Germany and Northern Europe, led. Bishop Martin Wharton (Newcastle), the Anglican Co-Chairman of the Porvoo Contact Group, read the sermon which was to have been delivered by Bishop Kenneth Stevenson, who was not able to attend due to illness. Bishop Stevenson, the former Bishop of Portsmouth, is himself part Danish, and is a Knight Commander of the Kingdom of Denmark's Order of the Dannebrog. In the photo above are some of the bishops who were at the service in St Alban's, along with Archdeacon LLoyd. (From left to right: Bp David Chillingworth, Primus of the Scottish Episcopal Church, Abp Kari Mäkinen of Turku, Abp Andres Põder of Estonia, Bp Ragnar Persenius of Uppsala, Bp Michael Jackson of Clogher, Bp Kresten Drejergaard of Fyens, Bp Helga Haugland Byfugligen of Borg, Bp Karl Sigurbjörnsson of Iceland, Bp Martin Wharton of Newcastle, Archdeacon Jonathan LLoyd, Bp Peter Skov Jakobsen of Copenhagen, and yours truly).

At the Sunday morning Eucharist in Copenhagen's Cathedral, our own Director of Ministry, the Revd Canon Ulla Monberg, was one of those administering Holy Communion to the congregation. It was personally a moving celebration for Canon Monberg, who told me that at the service two strands of her life came together: her Danish birth and culture, and her Anglican priesthood. In the photo below from left to right, Bishop Christopher Hill (Guildford), me, Canon Ulla Monberg, Mrs Hanna Broadbridge (chairman of the Council of International Relations of the Danish Church), Bishop Peter Skov Jacobsen (Copenhagen) and Archdeacon Jonathan LLoyd. 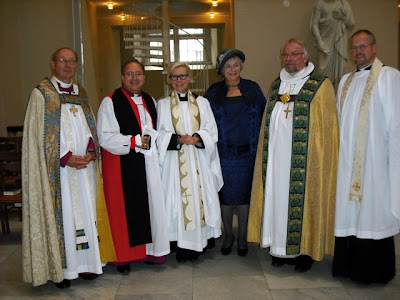 When the eucharist had ended the actual signing of the declaration by Danish Church officials took place. Pictured below, Mrs Hanna Broadbridge, Bishop Karsten Nissen of Viborg Diocese (signing) and Jørgen Skov Sørensen, the General Secretary of the Council on International Relations. 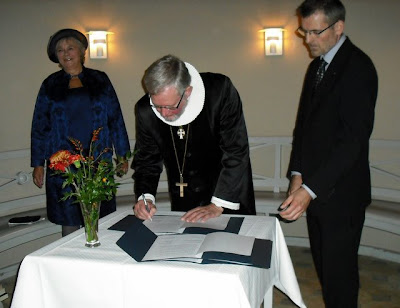 A hymn by the great Danish theologian N.F.S. Grundtvig, sung at the service, captured the mood of joy and commitment to our common mission as a Communion of Churches in Northern Europe:

O Loving Spirit from above,
infuse the church with Your eternal love,
so we gladly wander,
sister close to brother,
as God loves his children,
loving one another!
Spirit, hear our prayer!

The Porvoo Communion website is here. ﻿The Church of Denmark website is here.
Posted by David Hamid at 23:32
Email ThisBlogThis!Share to TwitterShare to FacebookShare to Pinterest