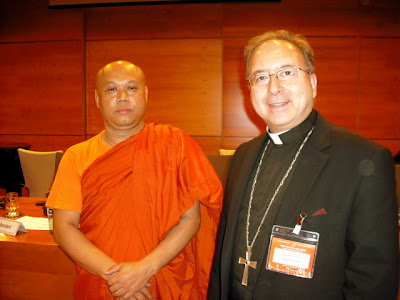 The Community of Sant’Egidio and the Archdiocese of Barcelona are hosting the International Meeting for Peace in Barcelona from 3 – 5 October. The theme for this year’s gathering is “Living Together in a Time of Crisis: Family of Peoples, Family of God”.

This annual gathering is part of the legacy of the historical Day of Prayer of Assisi, convened by Pope John Paul II in 1986. It brings together leaders of Christian Churches, world religions, distinguished representatives of international politics and culture, men and women, searching for peace through dialogue throughout the world. Approximately 500 representatives are joined by thousands of other people, especially youth, who meet explore how religious faith, dialogue and mutual understanding can help people face the challenges of the contemporary world.

One panel on Monday afternoon on “Alms Giving and Justice” particularly intrigued me as I recall a time when Christians were challenged about their views on "charity" as being a limited response to the needs of the world which called for "justice". The presentations were stimulating and encouraging, and pointed to the ways that charity and justice are related in the theologies of the great religions.

Dr Mustafa Çagrıcı, the Grand Mufti of Istanbul began by reflecting on how the Ramadan fast reminds Muslims of the plight of the poor. He commented that every human being, no matter how impoverished, can offer something to society –and that offering is charity. Professor Guiseppe Laras, the Chief Rabbi of Milan reminded us that we are all called to do our part in alms-giving, but that we are not necessarily called to finish the work of charity, that others come after us and build on what we have done. Albanian Orthodox Bishop Andon Merdani spoke of how our religions call us to treat people in their wholeness as children of God, attending to their physical as well as spiritual needs. Dr Alexander Agorodnikov, a survivor of the Soviet Gulag from 1986 to 1997, reflected on his experience of torture and deprivation in those years, yet how he experienced a deep conviction in the worst of prison conditions in Siberia: “love will save the world, and love is made visible in charity”. U Uttara, a Burmese Buddhist monk (above), exiled from his homeland since 1988, spoke of the joy of giving and sharing in wholesome actions. Dr Francesa Zuccarí, the coordinator of the Sant’Egidio programme for the homeless in Rome, affirmed how acts of mercy breaks down isolation of the poor, helps them to survive, and brings some, even if small, measure of justice.

The Community of Sant’Egidio started in 1968 in Rome. It is an association of over 50,000 laity in over 70 countries. Their website is here.
Posted by David Hamid at 07:00
Email ThisBlogThis!Share to TwitterShare to FacebookShare to Pinterest