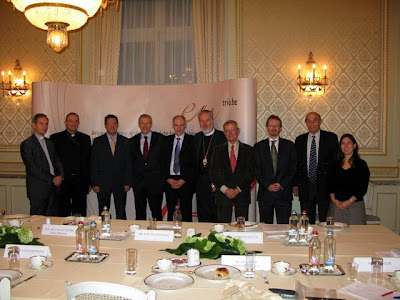 On 12th October, the Revd Canon Dr Robert Innes took part in a consultation of Belgian church leaders with their Prime Minister Yves Leterme. The one hour meeting took place under the Lisbon Treaty provisions for dialogue between political and religious leaders. Canon Innes is 3rd from the right in the above picture.

Canon Innes, besides being Chancellor and Senior Chaplain of Holy Trinity Pro-Cathedral in Brussels, is the President of the Central Committee of the Anglican Church in Belgium. Other Belgian religious leaders involved in the consultation included the Roman Catholic Bishop Harpigny and the head of the Belgian Protestant Council Dr Guy Liagre.

The discussion was wide-ranging, including themes of globalisation, poverty and ecology as well as the specific topic of the persecution of Christian believers in countries where the EU under its Belgian Presidency may be able to exert influence.

The Lisbon Treaty in Article 17 calls for the EU to "maintain an open, transparent and regular dialogue" with churches and religious organisations.
Posted by David Hamid at 08:00
Email ThisBlogThis!Share to TwitterShare to FacebookShare to Pinterest