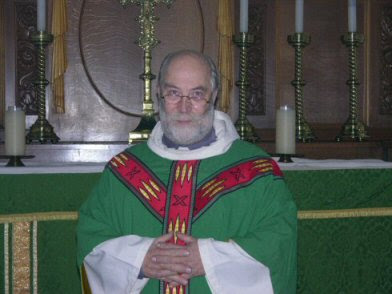 It was with great sadness that we learned of the death of the Revd Canon Nigel Elbourne who died of a heart attach on 29th September at his home in Normandy, 20 days after his 40th anniversary of his ordination to the priesthood. He leaves his wife Christine and a daughter, son and grandchildren. Canon Elbourne retired to France from Chester Diocese and was active in giving support to our congregation in Caen, for which he had Permission to Officiate.

Fr Nigel was committed to ecumenism throughout his priestly ministry. In retirement he continued his devotion to Christian unity and considerably strengthened ecumenical relations in Normandy. Right up until his death he was a frequent representative of our Church at regional ecumenical meetings, and had built up personal links with Roman Catholics, Reformed, Adventists, Russian Orthodox and others.

Fr Nigel was a frequent worshipper at the Roman Catholic Cathedral of Sées, where he had been given personal permission to receive communion by the last bishop of that diocese. He has also preached there on occasion, helped with the music, and had a slot on the RC local radio station.

Fittingly, his Funeral Mass on 7 October was held in held in Sées Cathedral. The Diocese was represented by the Revd Matthew Harrison of St George's Paris, who reported on the extraordinary ecumenical welcome given at the Cathedral for Fr Nigel's requiem.

The mass was presided by the diocesan priest-administrator - as the see is vacant at the moment. The cathedral dean gave an appreciation at the beginning of mass. The priest with diocesan ecumenical responsibility preached the homily. There were nine concelebrating RC clergy, from the small diocese, and a permanent deacon. And a message from the last bishop, who is now at Bayeux/Lisieux. (And one from the bishop of Chester.) The Eglise Reformée pasteur read the gospel. The Orthodox priest from Caen offered the commendation prayer and censed the coffin. Fr Varty (another retired priest with Permission to Officiate in this diocese) also gave an appreciation and I did the general intercessions. The Cathedral also laid on a vin d'amitié in their rooms afterwards. Many people were there.

Thank you Fr Matthew for sending this account of what was clearly a moving occasion. It is heartening and humbling to us all to know of the sometimes exceptional kindness of the local Church in France. It is indeed an encouragement that Fr Nigel's faithful ecumenical work was acknowledged in such a way by our partners. We give thanks to God for his life and ministry. May he rest in peace.
Posted by David Hamid at 12:27
Email ThisBlogThis!Share to TwitterShare to FacebookShare to Pinterest