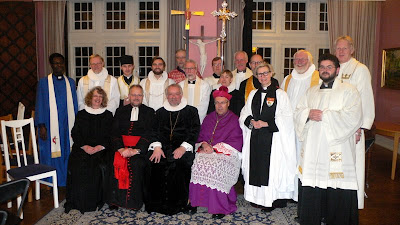 Copenhagen's streets saw 800 ecumenical walkers on the streets last Tuesday 24 January.  The Kirkevandringen ("church wandering") was started 58 years ago by the Fellowship of St Alban and St Serguis, and is older than the Week of Prayer for Christian Unity itself.  Pictured above with Archdeacon Jonathan LLoyd and Canon Ulla Monberg are the Bishop of Copenhagen and the Roman Catholic Bishop of Denmark, alongside clergy from the Russian Orthodox, Danish Lutheran, Danish Methodist, Swedish Lutheran, Norwegian Lutheran, and RC churches in the city.
The large congregation worshipped for 15 minutes in each church (with two services in each of the smaller churches), and walked in procession between each one.  Starting at St Paul's Lutheran Church (built 1877), they then went to Jerusalem Methodist Church (built 1866), St Aleksandr Nevskij Russian Orthodox Church (built 1883), St Ansgar RC Cathedral (built 1842), St Alban's Anglican Church (built 1887) and finally (for the sermon by the Bp of Copenhagen) to St Gustaf Swedish Church (built 1911) followed by strong Swedish coffee!  At St Alban's, Evensong was led by Canon Ulla Monberg.
Archdeacon LLoyd said "To have 800 people walking the streets in prayer in a temperature of -2C, was a wonderful experience of visible ecumenism in action."
Posted by David Hamid at 13:40
Email ThisBlogThis!Share to TwitterShare to FacebookShare to Pinterest