St Bartholomew's Dinard traditionally plays an active part in the Week of Prayer for Christian Unity in Brittany. This year was no exception. Our congregation hosted an ecumenical gathering on Thursday 19 January at which the Revd Gareth Randall, priest-in-charge of St Bartholomew's, preached in French. He spoke of the fundamental unity we share, whether Roman Catholic, Adventist, Reformed, Anglican, Methodist or Baptist, in the firm belief that Jesus is risen, and that through him, God's Son, we can attain eternal life.

Although relatively few in number on continental Europe, Anglicans continue to witness in significant ways to the Gospel imperative of unity for all Christians. 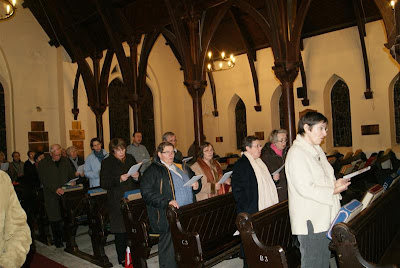 Posted by David Hamid at 15:29
Email ThisBlogThis!Share to TwitterShare to FacebookShare to Pinterest