The Synod of the Archdeaconry of France met from Wednesday 30 April until Saturday 3 May at St Jacut de la Mer in Brittany. Clergy and laity representing the over 60 congregations in France and Monaco gathered with their Archdeacon Ian Naylor to do the routine business of synod but also to spend some time reflecting on the theme "Equipping for Mission".

Several key resource persons provided input on the synod theme. Dr Clare Amos, the World Council of Churches' Programme Executive for Inter-Religious Dialogue and Cooperation gave two inspiring Bible studies on the ending of each of the four Gospels, lifting up the mission mandate for the infant Church which is embedded in their concluding chapters.

The Revd Canon Philip Mounstephen, formerly of St Michael's Paris and now Executive Leader of the Church Mission Society, spoke on the local and global dimensions to the Church's mission. The Revd Keith Lamdin, Principal of Sarum College, Salisbury, gave two papers looking at spirituality and leadership for mission.  Mr Paul Simmonds introduced the Foundations21 resource which will be available to the diocese for deepening Christian learning and discipleship.

Fr Franck Lemaître, the ecumenical officer of the French RC Bishops' conference also attended the synod, a sign of the close collaboration between the French RC Church and the Church of England in France. The Anglican-Roman Catholic (ARC) dialogue in France has been working most recently on a study of the Daily Office as a shared gift of Anglican and Roman Catholic communities, and has prepared material to be used in ecumenical gatherings. This Daily Office project was inspired by its study of the International Anglican-Roman Catholic Commission for Unity and Mission's text, Growing Together in Unity and Mission. 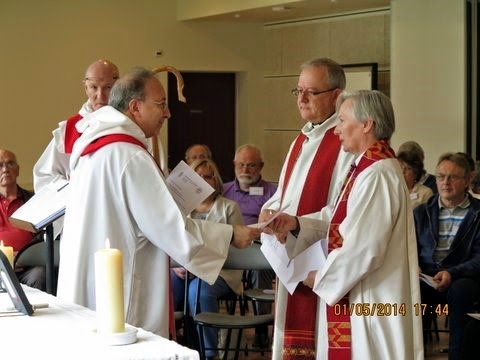 During Evening Prayer on Thursday, the Feast of SS Philip and St James, I commissioned two Area Deans to work with the Archdeacon of France, the Revd Canon Debbie Flach (Lille) and the Revd Canon Andrew Hawken (Midi Pyrénées and Aude).

Posted by David Hamid at 10:58
Email ThisBlogThis!Share to TwitterShare to FacebookShare to Pinterest