I am Iraqi; I am Christian 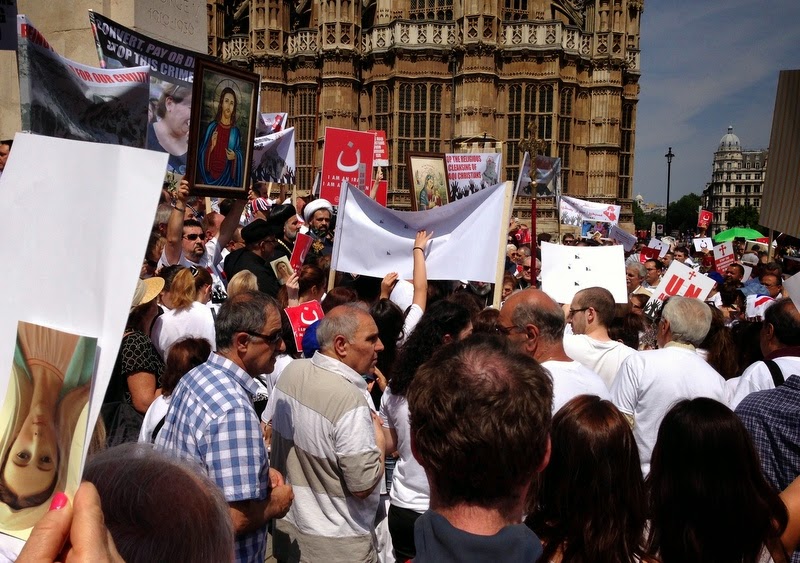 I don't often join in protests in Parliament Square but today, 26 July, I did join the Iraqi Christian community whose churches organised a solidarity stand for the victimised Iraqi Christians in their homeland, especially in the area of Mosul, a city in Northern Iraq, near the ancient biblical city of Nineveh.

Many signs were being held up with the letter Nun (ن) and the wording, "I am Iraqi; I am Christian". Nun (ن)  is the 14th letter of the Arabic alphabet, equivalent of N in the Roman alphabet. It is the first letter of the word Nasara (نصارى : Nazarenes), which is what ISIS, the Islamic State in Iraq and the Levant, have marked on the property of Christians in the areas they now claim as their caliphate. ISIS gave an ultimatum to Christians living in and around Mosul: convert, pay jizya (a protection tax) or be put to death. The region is now left without any Christians, for the first time in close to 2000 years, the last remaining having fled with only the clothes on their back.

Many Muslims joined their Christian brothers and sisters in solidarity in Parliament square.

The Archbishop of York, Dr John Sentamu, has published three prayers today for the people of Mosul, highlighting the common suffering of both Christians and Muslims in Iraq::

Holy God, your Holy family was driven into exile and many holy innocent boys were massacred, we hold before you today the suffering people of Mosul. Amen

Hold in your loving arms, all those who have been caught up in this conflict. We pray for those forced to flee their homes, all who have lost friends, family and possessions and who now face an uncertain future. Bless our Christian brothers and sisters who have seen the destruction of their churches and communities and for our Muslim neighbours who have also experienced destruction and suffering. Amen.

Lord, in this city where Christians and Muslims have lived together for over 1400 years, we pray for healing, peace and restoration. Bring light out of this present darkness and hope from despair that guided by your Holy Spirit, all your children may find a new way forward together based on your love for us all. Amen


Posted by David Hamid at 17:34
Email ThisBlogThis!Share to TwitterShare to FacebookShare to Pinterest