The Reverend Clive Anthony Fairclough has been appointed Chaplain of St Andrew's Church, Moscow. He comes to this diocese from Worcester where he has been Rector of the Flyfords Benefice, Priest-in-Charge of the United Parish of Fladbury, Cropthorne, Wyre Piddle, Lower Moor and Charlton and Associate Priest of the Bowland Benefice. He takes up his new post on 8th August 2014.Fr Anthony will also be the Archbishop of Canterbury's Apokrisiarios (official representative) to the Patriarch of Moscow. We welcome Fr Clive and his wife Joanna to this diocese.

St Andrew's is one of the most international of our parishes in the diocese, with members drawn from every continent. Church of England worship in Moscow dates 1553 when Tsar Ivan the Terrible allowed the first non-Russian-Orthodox services, at that time for the English traders employed by the Russia Company. The church and parsonage were confiscated by the Bolsheviks in 1920, and used for various purposes, including as a recording studio for the Soviet State music company Melodiya. Until 1991 when St Andrew's was reopened for Anglican worship, services had to be held in the British Embassy.

Fr Clive succeeds the Revd Canon Dr Simon Stephen's who has been Chaplain since 1999. Fr Simon celebrated his last Sunday in St Andrew's on 15 June. He has taken up a volunteer post in the Province of Melanesia (the Solomon Islands and Vanuatu), which could not be a more contrasting place to Moscow! 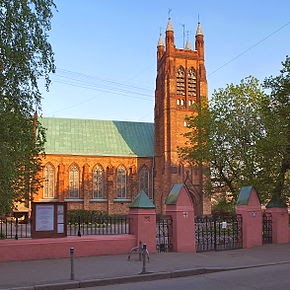 Posted by David Hamid at 09:09
Email ThisBlogThis!Share to TwitterShare to FacebookShare to Pinterest